Insect fat instead of butter: is this the future? 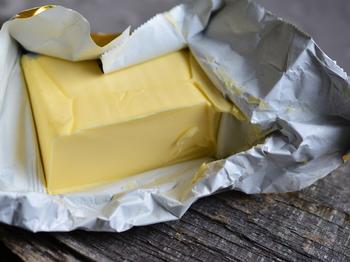 Insect-based fat is a sustainable and healthy alternative to butter. When in bakery products less than half of the butter is replaced by insect fat, one can hardly taste the difference, according to research at Ghent University in Belgium.

The researchers used fat from black soldier fly larvae in waffles, cookies and cake.
They baked 3 types of each version:

Then they served the bakery products in the 3 different versions to a taste panel of consumers, asking if they could taste the difference.

The cake with a quarter of insect fat passed the test: the taste panel did not notice that insect fat was used. In the case of waffles, they did not even notice the presence of insect fat when half of the butter had been replaced. Also, the texture and color were hardly affected as compared with butter.

Why should we use insect fat instead of butter?

“The ecological footprint of an insect is much smaller compared to animal-based food sources” said researcher Daylan Tzompa-Sosa (Ghent University). “Besides, we can grow insects in large quantities in Europe, which also reduces the footprint of transport. After all, palm fat is often imported from outside of Europe.”

“Insect fat is a different type of fat than butter” researcher Tzompa-Sosa explains. “Insect fat contains lauric acid, which provides positive nutritional attributes since it is more digestible than butter. Moreover, lauric acid has an antibacterial, antimicrobial and antimycotic effect. This means that it is able, for example, to eliminate harmless various viruses, bacteria or even fungi in the body, allowing it to have a positive effect on health.”

Will we soon be able to buy bakery products with insect fat in the supermarket?

Researcher Joachim Schouteten: “That is possible. Currently the price is still too high, because it is only produced on a small scale. We will have to investigate what consumers think on a larger scale. Products with insects such as insect burgers have not yet proved to be a great success. Bakery products with insect fat are more likely to be appreciated, because the insects are merely a form of fat substitute.”