Sugar brings a lot of carbon dioxide into the deeper sea 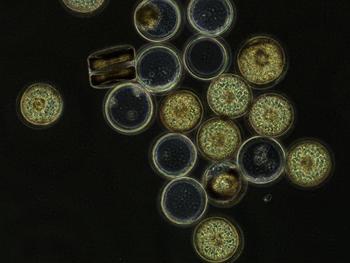 The oceans are a very important reservoir for carbon in the system of the earth. However, many aspects of the marine carbon cycle are still unknown. Scientists from Bremen and Bremerhaven now found that sugar plays an important role in this process. At the same time, the sweet energy source is important for the ecosystem of the oceans.

In the sunlit surface layer of the ocean, photosynthetic microalgae such as diatoms convert more carbon dioxide into biomass than Earth’s tropical forests. Like land plants, diatoms sequester carbon dioxide into polymeric carbohydrates – in other words: into long-chained sugars. However, it has proven difficult to quantify how much carbon dioxide can be stored in the global oceans throughout this process.

This gap of knowledge sparked the interest of the research group Marine Glycobiology, which is located at the Max Planck Institute of Marine Microbiology and the MARUM, Center for Marine Environmental Sciences at the University of Bremen and cooperates with the Alfred Wegener Institute for Polar and Marine Research. To close this gap, the scientists utilized a recently developed enzymatic assay to dissect photosynthetic microalgae and measure concentrations of the long-chained sugar laminarin, an important energy source for microalgae including diatoms.

Based on microalgae obtained from the Arctic, Atlantic, and Pacific Oceans and the North Sea, the researchers estimated that this biomass is on average composed of 26 percent laminarin. “This amount suggests that photosynthesis in the surface ocean produces on average twelve gigatons of carbon annually in the form of algal laminarin” says Stefan Becker, first author of the study, published in the scientific journal PNAS in March 2020. “This is a large amount, considering that, according to the Global Carbon Budget 2019, humans released 11.5 gigatons of carbon during 2018.” However, only a small part of the carbon bound by laminarin is permanently removed from the atmosphere – a large part is subsequently released again through natural processes. In total, the oceans permanently absorbed around 2.6 gigatons of carbon in 2018. “Yet, our findings indicate that sugars like laminarin are also important for the permanent fixation of carbon in the sea,” says Becker.

Furthermore the scientists found that laminarin comprises as much as 50 percent of the organic carbon in sinking diatom-containing particles. “Thus laminarin plays a central role in carbon transfer from surface waters to the deeper ocean,” says Jan-Hendrik Hehemann, leader of the research group Marine Glycobiology. “Whether laminarin is fixed in deep waters is an important further question that we will address in the future”.

Variation during the day

In addition, as microalgae represent the all-important base of the marine food web, the findings show that laminarin occupies a prominent position in global ocean ecology. The researchers from Bremen found out, that the amount of sugar in microalgae is high, but not always the same. “The concentration in algal cells increased markedly during the day and decreased over the night, in analogy to the seasonal storage of energy in starchy roots and fruits of land plants”, says Hehemann. “This may have a major impact on the feeding behavior of marine animals, as the time of day determines how much sugar – and therefore energy – animals get when they eat.”

Collectively, these findings highlight the prominent ecological role and biochemical function of the sugar laminarin in the ocean.