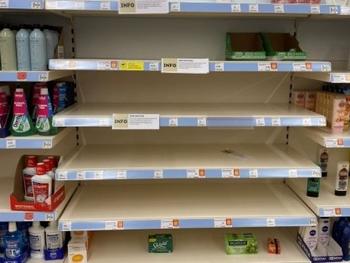 Limited supplies of hand sanitiser and soap in Sainsbury’s, March 2020.

Following the social distancing measures put in place by the prime minister last week (16th March), retailers are making changes in how they operate as they react to the new norm that COVID-19 is imposing.

The outbreak of the virus is unprecedented and its impact on the retail sector has been profound. As early as late February retailers were bracing themselves for a spike in demand and even ahead of the measures introduced last week regarding social isolation, some 10% of shoppers had stockpiled goods according to Mintel’s latest data (consumers questioned on 13th March).

Whilst this is a minority of consumers, such a spike is enough to place significant strain on retailers’ stock and logistic networks and of course causes unavailability. Initially these were small, but pictures shared on social media and the news increased interest in the issue and naturally others considered the same behaviour and it became a self-fulfilling prophecy.

The out-of-stock items were initially confined to a select few categories; cleaning products and toilet rolls were the first to experience the impact, but as the stockpiling trend has grown other categories have faced pressure – with packaged bread and chicken currently in high demand. What is notable about this, is that it is showing the same pattern our colleagues in China observed in that market during the outbreak, with staples and ambient in high demand in the early days of the outbreak/lockdown.

Will we see a boost to fresh and health categories?

As the situation develops and individuals are being forced to spend longer indoors, the focus is moving to health and fresh categories. We are beginning to see a similar pattern, and this will be a key pressure as the situation in the UK develops further.

The current impact has been indiscriminate, affects the largest chain and local businesses equally, with all struggling to fulfil the heightened demand. However, for smaller retailers, the impact of a rapid growth in demand is far greater, for many supply networks are not as developed and deliveries of new stock are not as frequent. This has been further magnified by consumers, either by choice or under advice, staying closer to home and shopping more locally.

Online has seen a demand spike due to some consumers not wanting to go into stores, and because this channel best supports big-basket demand. All online retailers have seen demand skyrocket, to the point where Ocado is forced to make consumers queue and/or take its site down for periods as it processes demand.

While arguably a little late, the enforcing of limits on select lines was a required step by retailers. In the same way scientific experts have talked about the need to ‘flatten the curve’ regarding the outbreak, this is what retailers are having to do in terms of demand to ensure supply chains have enough time to react and crucially all can have access to the products they need. This needs to be supported by a sustained campaign of calming shoppers. Clearly, the continued ‘stockpiling’ is coming from a lack of trust that products will be available long-term, and retailers need to reinforce the point that there is enough to support the nation in this difficult time.

We have also seen retailers forced to react to the differing stages of isolation the population are currently experiencing. With the impact of the virus stronger on the over-70s, and the advice for them to stay at home, there has been a need for dedicated shopping hours and priority delivery slots for this group, whilst younger shoppers are now being advised, where possible, to not shop online and come into the store. This is only the beginning of the dedicated shopping hours and there are clearly teething problems, in particular, the long queues some are experiencing, which is problematic as it gathers those at risk in one place for an extended period. However, this approach – treating customers with different risk in differing manners – will be finessed as we move forward.

Things will get more challenging

To date, the vast majority of the impact on the sector has been preparation driven, but we now move into a more difficult stage. As more consumers, either through choice or through requirement, isolate, new thinking will be needed about how to ensure these shoppers have access to food and drink. Online will play its part, but as it currently accounts for just 7.0% of spending in the sector, it will need massive investment and man-power, hence the requirement drive from the major players, to fulfil even a quarter of demand in the sector via delivery. Stores will have to play their part: as we saw in China, the introduction of ‘contact-free’ shopping will be important, with potential for extremes – where orders were left in dedicated ‘pick-up’ zones outside stores.

As concern grows, there will be a need for retailers to reassure shoppers that staff are fit and well. Looking to China again, we saw orders come with a temperature reading of the delivery driver and staff who packed orders. Such moves, whilst not fool-proof, can add reassurance to shoppers.

Foodservice can help ease the pressure on grocers

As pubs and restaurants were advised to close on Friday, we have seen businesses up and down the country switch to collection or takeaway as they react to the new norm that COVID-19 is imposing. Healthy fast-food chain Leon, for example, has announced its plans to repurpose sixty-five UK restaurants into shops by selling meals through both click-and-collect and delivery services starting from Wednesday. Meals previously served in Leon restaurants will be sold as ready meal-type foods, refrigerated and packaged in plastic pouches, which can be heated or frozen at home. This move by Leon is a clever one and a natural evolution of simply moving to collection and delivery-only business.

There has been an unprecedented demand within the grocery sector in the recent weeks, and whilst retailers are reacting as quick as they can to this – the mass closure of the foodservice sector in the UK will only place further demands on the in-home grocery sector. There is, therefore, a need for foodservice to play its part in helping to fulfil the supply of food and drink to consumers. Switching to essentially ready meals that can be eaten now, or at a later date, is a clever solution. Such times require businesses to think outside of the box and come up with new solutions.