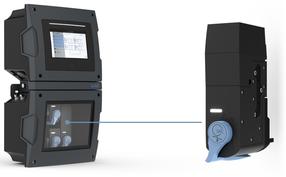 View of the online analysis system with the control unit at top (7” display) and the fluidic compartment at bottom, where the single sensors can be inserted. The water sample flows through the entire fluidic component, the backplane and each embedded sensor. Right: Close-up view of the SAC sensor module with the dimensions 44 mm x 100 mm x 158 mm. 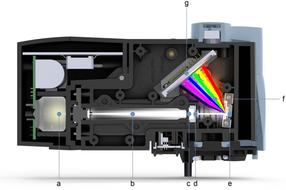 The article describes the development of Bürkert´s modular type 8905 Online Analysis System for continuous monitoring of the most important parameters in water treatment at waterworks.
It integrates the functions of several conventional devices in one platform. The requirements for realising such a concept successfully are outlined by the example of a module for measuring the spectral absorption coefficient (SAC) at 254 nm. The SAC makes it possible to determine the quantity of dissolved organic compounds in water samples. The effect of the fluidic and mechanical aspects on the optics of the analytical module and it´s interaction with the complete system are described. The Online Analysis System is based on a platform with three pillars. The fluidic mechanical platform: All available sensors can be connected and disconnected on a standardised backplane, even during operation.
The electrical platform: All sensors and control modules, as well as analogue and digital I/O modules, Industrial Ethernet modules, etc. can be combined on a standardised backplane. The software platform: All modules within the system are connected to a bus system, which also makes it possible to detect new modules and integrate their functions in the system without additional configuration.

Facts, background information, dossiers
More about Bürkert
Topics A-Z
All topics
Get in Touch with the Supplier Now: Download Whitepaper