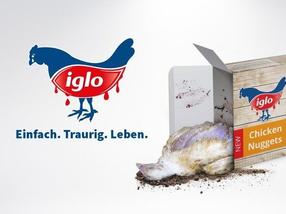 The Albert Schweitzer Stiftung für unsere Mitwelt and allied animal welfare organisations throughout Europe call on Nomad Foods to improve the husbandry conditions of its chickens for fattening. With its brands Iglo, Findus, Birds Eye and others, the group is Europe's leading supplier of frozen food, according to its own figures. Iglo is one of the industry leaders in Germany and is therefore the focus of the campaign in this country. Nomad Foods presents itself and its brands as particularly sustainable. On the subject of animal welfare, however, the company is reluctant to accept feasible changes that would reduce the suffering of many millions of broiler chickens.

"Consumers expect Iglo quality. But the company uses cheap chicken meat from factory farming," criticizes Mahi Klosterhalfen, President of the Albert Schweitzer Foundation. "Iglos competitor Frosta and even Kentucky Fried Chicken will meet the demands of our European broiler chicken initiative. The Iglo brand will lose its credibility if it continues to rely on chickens for fattening from the worst breeding conditions and the worst husbandry conditions."

Massive health problems due to overbreeding, cramped confinement and poor stunning practices during slaughter are part of the legal standard in chicken farming for fattening. In order to counteract the greatest problems, the almost 30 animal welfare organisations of the European Chicken Breeding Initiative have formulated their own criteria. More than 150 large companies from the USA and Europe have already committed themselves to meeting these targets, including Frosta, Kentucky Fried Chicken, Danone, Nestlé and Unilever.

The campaign against Nomad Foods starts on 3 September. About ten organisations from six countries are participating in this project. The Albert Schweitzer Foundation will concentrate on Iglo in Germany. The company had previously rejected offers for talks. Other brands of the Nomad Foods group are targets of the campaign: Findus, which is one of the market leaders in frozen food in Norway, Sweden, Finland, Italy, France and Spain, and Birds Eye, which is one of the largest players in the industry in Ireland and the United Kingdom.