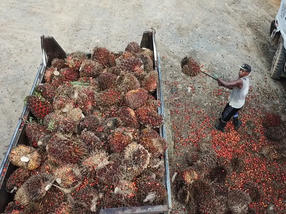 Workers on the plantation: palm oil fruits are loaded onto trucks. 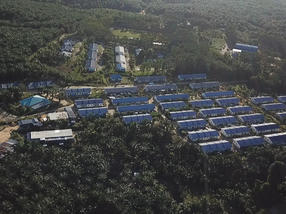 Life in the plantation, houses of the workers 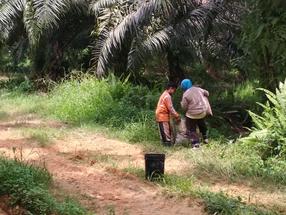 Children at work on the palm oil plantation in Sabah, Malaysia

Almost every sixth product in the Swiss retail trade contains palm oil. Palm oil is also omnipresent in the products of the Swiss food giant Nestlé. A new research by Solidar Suisse shows how workers on plantations in Malaysia from which Nestlé purchases palm oil are exploited. On the remote plantations they are at the mercy of the arbitrariness of the plantation operators, child labour and forced labour are widespread. Solidar Suisse demands transparency and fair working conditions from Nestlé in the plantations.

Switzerland obtains one third of its palm oil from Malaysia. A large part of it comes from the federal state Sabah, in the northeast of the island Borneo. The heavy and dangerous work on the plantations is mainly done by migrant workers from Indonesia. Although industry depends on them, 70 percent of the 1.2 million migrant workers in Sabah live illegally without valid papers.

Tens of thousands of children who officially don't exist.

Between 50,000 and 200,000 children live with their parents on these plantations and support them in their work. The youth Ati is also one of these children: "I was born and raised on the plantation and could never go to school. Since I can remember, I've been helping my parents collect the fruit." Children born on the plantations are often even stateless, as Malaysia does not issue birth certificates for children of migrant workers. These children have no access to public schools or medical care and therefore have little chance of a life outside the palm oil plantation.

Nestlé, the world's largest food company, purchases palm oil from Sabah on a large scale, including from the mills supplied by the plantations studied. Nestlé and other food and agricultural companies are thus benefiting indirectly from the lowest wages, the lack of protection for workers and child and forced labour on the palm oil plantations.

Promises made so far do not change the situation of workers

Although Nestlé claims not to tolerate forced and child labour in the supply chain, these worst forms of exploitation are widespread in the Group's supply chains. This shows once again that issues such as human and labour rights are still too low on the list of priorities of large corporations. In order to change this, legal rules are needed, such as those required by the Group Responsibility Initiative.

Simone Wasmann, co-author of the palm oil research, sees a need for action at Nestlé: "If Nestlé is really serious about social responsibility and sustainability, then the company must now influence its suppliers and business partners in Sabah. Nestlé must ensure that workers are regularly employed and that no children are exploited."