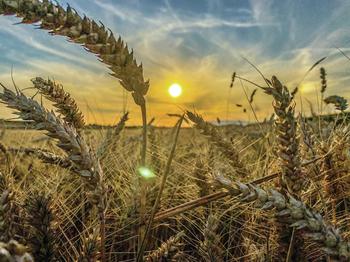 Keeping markets open, getting grain supplies blocked by Russia out of Ukraine and avoiding hoarding - that's how the G7 group of leading democratic industrialized nations wants to curb the rise in food prices. "All of us together, especially the major exporting nations, also have a responsibility to the rest of the world," Agriculture Minister Cem Özdemir (Greens) said Saturday in Stuttgart after concluding the meeting with his G7 counterparts. "We speak out against export freezes and call for keeping markets open." Commenting on India's announcement that it would no longer export wheat, Özdemir said, "If everyone now starts making such export restrictions or even closing markets, it will have the effect of exacerbating the crisis."

According to the department heads, the G7 heads of state and government are now to discuss the issue, Özdemir reported. India will be a guest at the summit at Schloss Elmau in Bavaria at the end of June, he said. Germany currently leads the group of countries. International grain markets are particularly tense because of the Russia-Ukraine war, and prices are going up. The soaring prices threaten poor countries in particular, which are dependent on imports.

The secretary general of Welthungerhilfe, Mathias Mogge, sees the danger of famine. "Countries like Egypt, Kenya, South Sudan, Lebanon and many other states have been heavily dependent, directly or indirectly, on Russian and Ukrainian exports," Mogge told Redaktionsnetzwerk Deutschland (RND). "These countries are now not receiving the quantities they ordered or have to pay a lot more for them." Those suffering, he said, are particularly poor people who have to spend a high proportion of their income on food. The increased prices are also a huge problem for aid organizations such as Welthungerhilfe, he said.

According to Özdemir, the G7 is fundamentally against export stops. "We call for markets to be kept open." India, the world's second-largest wheat producer, had previously announced it would ban exports of the grain with immediate effect. The decision was taken in light of the rise in global wheat prices, which New Delhi believes puts India's food security at risk, it said. In the country, a heat wave had destroyed parts of the harvest in recent months.

The aid organization Bread for the World expressed understanding for India's ban on wheat exports. "It is only justified if the Indian government wants to prevent hunger in its own country by stopping exports," Francisco Marí, world food officer at the Protestant aid organization, told the daily newspaper "taz." Otherwise, the state would not be able to buy enough grain to supply 500 million poor Indians with subsidized wheat. The G7 could itself provide millions of tons of additional wheat by burning or feeding less grain as fuel.

According to Özdemir, the G7 want to monitor the prices of production and foodstuffs more closely than in the past, including fertilizers, for example. To this end, he said, the agricultural information system of the G20 group of industrialized and emerging countries should be strengthened.

"There must be no excessive stockpiling of agricultural products in individual countries - that is not solidarity-based and leads to further price increases," Özdemir said. In addition to the Federal Republic, the G7 group includes the United States, Canada, France, Great Britain, Italy and Japan.

The environmental protection organization Greenpeace expressed dissatisfaction with the results of the G7 conference of agriculture ministers. "The ministers have owed explanations as to what concrete measures they are taking to stabilize the markets," Greenpeace agriculture expert Matthias Lambrecht told the newspapers of the Funke Media Group. "For example, there is not yet a gram of wheat ready to supply people threatened by hunger if exports from Ukraine fail."

According to the report, Germany should lead the way in Europe and immediately end the admixture of biofuel to diesel and gasoline. "When millions of people are starving, it is not justifiable that valuable food is being burned up in combustion engines in rich countries."

The G7 is looking at alternatives to shipping grain from Ukraine to break the Russian blockade. After there were problems with rail transport via Romania because of the different track widths of the railroads, they were looking into exporting via Baltic ports, for example, Foreign Minister Annalena Baerbock (Greens) said Saturday at the end of a G7 meeting near Weissenhäuser Beach on the Baltic Sea.

The G7 group called on Russia to end its blockade of Ukrainian grain exports. Russia's unprovoked war in Ukraine has worsened the global economic outlook with soaring food, fuel and energy prices, said a statement adopted at the foreign ministers' meeting. Some 43 million people are one step away from famine, it said. Food insecurity and malnutrition loom.

Russia rejected responsibility for high food prices and the threat of a hunger crisis. Prices were rising because of Western sanctions, Russian Foreign Ministry spokeswoman Maria Zakharova wrote Saturday on her Telegram channel. "If you don't understand this, it is either a sign of stupidity or for deliberately misleading the public."/hgo/cb/bk/aha/DP/he (dpa)