Carlsberg presents the latest version of the Fibre Bottle

A green step into the future? 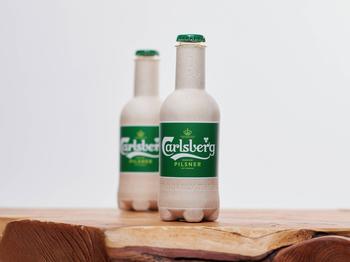 Carlsberg presents the latest version of the Fibre Bottle as part of its largest pilot project and demonstrates pioneering spirit in the name of sustainability.

Looking back on 175 years of company history, it is clear that Carlsberg and brewery founder J. C. Jacobsen have always had their finger on the pulse of the times, if not always one pioneering step ahead. From the discovery of the pH scale to the isolation of pure-breeding yeast in the brewery's own industrial research laboratory founded in 1876, the world's third-largest brewery group has been testing a new, innovative project since 2015: the so-called Fibre Bottle, which is now entering a large-scale pilot phase as Fibre Bottle 2.0.

This involves the development of the world's first beer bottle made of sustainably produced wood fibers and PEF (polyethylene furanoate), which is already (almost) 100% bio-based and fully recyclable. The novel and biodegradable bottle shell has the added benefit of insulating and keeping the beer cooler for longer compared to conventional cans or glass bottles.

Brewing for a better tomorrow

In the project phase currently underway, the new Carlsberg-branded Fibre Bottles are being put into the hands of selected stakeholders across Europe for the first time. Here, the latest prototypes contain Carlsberg beer brewed with organically grown and regenerative barley, and focus on the holistic advancement of revolutionary technologies and sustainable practices in the beverage industry.

In the eight Western European markets of Germany, Denmark, Sweden, Norway, Finland, the United Kingdom, Poland and France, a total of 8,000 Fibre Bottles will be tasted and feedback gathered from selected stakeholders during the pilot project. Testing on this scale gives us the opportunity to gather feedback on people's experiences with the product, which will inform the next generation of the design.

The new Fibre Bottle harnesses the potential of PEF

While the exterior of the prototypes, manufactured by packaging company Paboco, is made from sustainably sourced and fully recyclable wood fibers, the inner cover of the bottles uses a thin plastic film made from 100% bio-based polymer PEF (polyethylene furanoate), which guarantees the freshness of the bottle's contents. Developed by Avantium, a leading expert in renewable chemistry, PEF is made entirely from natural raw materials. It is compatible with plastic recycling systems and can be degraded in nature if it ends up outside the national recycling system. In addition to the benefits of sustainable packaging, PEF acts as a highly effective barrier between the beer and the bottle's outer shell, protecting the beer's flavor and carbonation better than traditional fossil fuel-based PET plastic.

Currently, the only exception to the holistic recyclability cycle of the Fibre Bottle is the bottle closure, which ensures the quality of the bottle's contents.

Together with packaging company Paboco and other partners from the paper bottle community, Carlsberg is already researching alternative fiber-based bottle closures, with a generic solution expected in 2023. Following the completion of the large-scale pilot phase currently underway, Carlsberg will continue development with Avantium and Paboco to find a customized 3.0 solution.

The sustainable innovations and advances are not limited to the bottle, but also to its contents: in collaboration with barley malt supplier Soufflet, a beer has been brewed with barley that has been grown in a fully organic and regulatory manner.

While consumers can still expect the unmistakable Carlsberg taste, this particular barley cultivation not only improves biodiversity in the fields, but also promotes soil health and increases the natural carbon sequestration in the soil compared to conventional farming methods.

Firmly anchored in Carlsberg's corporate philosophy is the combination of the traditional art of brewing beer at the highest level of quality with innovative approaches and the continuous pursuit of sustainability. For example, the current generation 2.0 of the Fibre Bottle already performs better in the product eco-balance than the disposable glass bottle and causes up to 80% fewer emissions. This means that for the same carbon footprint that a single single-use glass bottle generates in production, five Fibre Bottles of type 2.0 can be produced.

With market readiness targeted, Carlsberg is aiming for the same low carbon footprint as that of a refillable glass bottle, which is currently the best performing primary packaging for Carlsberg beers when collected and reused in efficient systems. The use of the Fibre Bottle on a large scale is expected to expand the packaging range to meet demand and complement existing packaging such as glass bottles and cans.