Study: How smokers and drinkers benefit from apples and tea 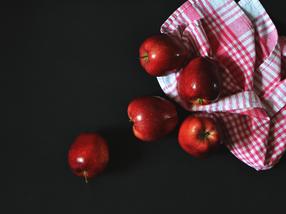 Plenty of fruit and vegetables can promote health. Now a study shows that it is above all those people who are particularly at risk who benefit from this.

"An apple a day keeps the doctor away": According to an international study, this proverb could be true - especially for smokers and drinkers. And especially when the fruit is enjoyed with a cup of tea. Both apples and tea are rich in so-called flavonoids. Their consumption protects against cancer and heart diseases, write researchers in the journal "Nature Communications".

Some determine the colour of flowers and thus attract pollinators. Others act as protection against pests and others as UV protection for the plants. But flavonoids can also have positive effects on humans. Previous studies have indicated that the substances support the body's defences and mental strength, help lose weight and prevent infections.

Another indication is provided by a study by the Australian Edith Cowan University and the University of Copenhagen. The team led by nutrition researcher Nicola Bondonno and physician Frederik Dalgaard analysed data from a Danish long-term study which, among other things, recorded the nutrition of more than 56,000 participants between the ages of 52 and 60 over a period of 23 years. The researchers compared these data with the deaths within the group.

The evaluation showed that those participants who regularly ate foods with a high flavonoid content were less likely to die of cancer or heart disease. These protective effects were particularly pronounced in people who, as smokers or drinkers, had an increased risk of such diseases.

For first author Bondonno, this means that the consumption of appropriate foods should be encouraged, especially in these risk groups. "However, the consumption of flavonoids does not counteract all the increased mortality risks associated with smoking and heavy alcohol consumption," she is quoted in a communication from Edith Cowan University. "By far the best thing for your health is to quit smoking and reduce alcohol consumption." Because the change of these habits is difficult for many people, an increased flavonoid consumption should be stimulated at the same time.

Sabine Kulling of the Federal Research Institute for Nutrition and Food (Max Rubner Institute) in Karlsruhe comments that this is similar to the recommendations of the German Society for Nutrition (DGE): "The study largely confirms that a diet with five portions of vegetables and fruit a day, as recommended by the DGE for a long time, is health-promoting. Damage caused by smoking and drinking can be somewhat mitigated."

When asked to what extent flavonoids are causally protective against cancer and cardiovascular diseases, the expert, who was not involved in the study, warns caution: "This cannot be deduced from the study. One problem with epidemiological studies is that they did reveal associations, but not causalities: "Flavonoids are more likely to be seen as a marker or indicator for an overall healthier diet and lifestyle. They may also make a small contribution to reducing the risk of mortality, but they are certainly not the only ones responsible."

This would also be shown by the data in the study: If red and processed meat, fish, fibre, saturated and unsaturated fatty acids are also taken into account in the evaluation, the protective effect of the flavonoids was significantly lower.

Nevertheless, Kulling praises the study: "Nutrition is very complex, and many factors influence disease risks. All the more important are such studies." However, it points to a limitation of the study: The participants were divided into five groups according to flavonoid intake. This inclusion was based on a single, albeit substantiated, dietary survey at the beginning of the study. This was not checked again in the following 23 years.

"The mean age of the test persons was 56 years, many of them probably retired from working life during the study period," explains Kulling. A new stage in life would probably also lead to changes in diet or lifestyle.

Independently of this, it has already been shown that flavonoids can contribute to health by inhibiting the adhesion of blood platelets, which is important for cardiovascular diseases, said Kulling.

Alcohol consumption and smoking promote inflammation and damage to blood vessels, which can increase the risk of a number of diseases", says Bondonno. Other studies have shown that flavonoids have anti-inflammatory and positive effects on blood vessels. "This may explain why they are associated with a lower risk of cardiac death and cancer."