Insects and algae as feed for poultry 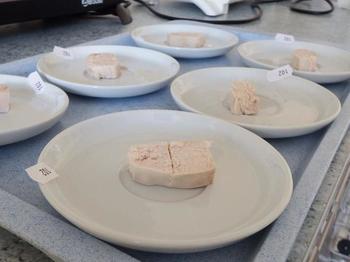 The meat of 132 animals was analysed for the study.

More and more animal products are consumed worldwide. This growing demand requires a considerable amount of high-protein feed for farm animals. However, the cultivation of animal feed is often accompanied by land-use changes such as deforestation. Future feed should therefore become independent of arable land. Insect breeding and cultivation of microalgae could serve as an alternative source of protein. Researchers at the University of Göttingen have found that the meat quality of chickens fed with certain insects or microalgae is suitable for human consumption.

The results have been published in the Journal of the Science of Food and Agriculture.

In the study, chickens were fattened with soy, spirulina or insects as the main protein source in the feed and examined with regard to their meat quality. The focus was on their growth performance, the meat quality under industrial packaging conditions and their sensory properties. The analysis of the meat of 132 animals showed that both meal from larvae of the black soldier fly and the microalgae Spirulina can be used in poultry feed without major quality losses. Chickens fed with the larvae meal produce meat that corresponds to the current status quo. On the other hand, if the chickens are fed with spirulina, both the meat colour and the taste are more intense. "Overall, both protein sources proved to be suitable and therefore represent a suitable alternative to soy," says first author Dr. Brianne Altmann from the Product Quality of Animal Products Department at the University of Göttingen.

Microalgae are already being produced worldwide for biofuels, animal feed and human consumption, but are more expensive than soy meal. Insects are currently only permitted in the European Union for fish as animal feed. It is expected, however, that they will also be permitted as poultry feed in the near future. For this to happen, however, insects must be produced with certified feed. "However, the production of insects as animal feed will only be truly sustainable if residual and waste materials are also allowed to be used as animal feed," explains head of department Prof. Dr. Daniel Mörlein.

The study was conducted as part of the project "Sustainability Transitions in Food Production".