Beer myths put to the test

Of Sumerians and Sommeliers 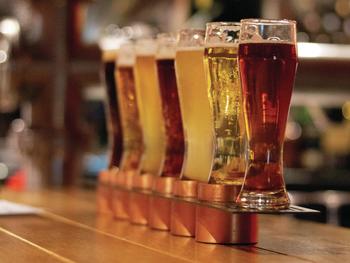 Photo by Proriat Hospitality on Unsplash

Beer is one of the oldest foods. But where was the first beer brewed? And is the barley juice healthy? Background information on the International Beer Day on 6 August.

More than 1500 breweries, up to 6000 different brands, countless museums on cultural history. Beer is still considered the German's favourite drink - although the Corona pandemic has left clear marks on sales in this country too. Time for a fact check:

Beer has been around since man first started growing grain. Thousands of years ago, the brew was popular in Mesopotamia, the land between the Euphrates and Tigris rivers. According to historians, the Sumerians living there knew at least nine varieties, which they produced mainly from barley and emmer, a type of wheat. The art of brewing reached Egypt via the Babylonians, where the first pubs are said to have existed as early as 3000 BC. The oldest archaeological evidence of the Germanic art of brewing comes from Kulmbach (Bavaria): beer mugs dating from around 800 BC.

ASSERTION: Beer is beneficial to health.

Biochemists at the University of Nuremberg-Erlangen have actually discovered that substances contained in beer can slow down fatty degeneration of the liver caused by obesity and poor nutrition, as well as having a beneficial effect on fat and sugar metabolism.

Xanthohumol, for example, is found exclusively in hops and is responsible for the yellow colour of its flowers. Nevertheless: Because of its alcohol content, conventional beer is of course no medicine.

Like other beers, non-alcoholic beer in this country is brewed strictly according to the purity law: from water, barley, yeast and hops. However, a small amount of alcohol may still be present in "non-alcoholic" beer, according to the German Brewers Association: "Either fermentation is stopped when the residual alcohol limit of 0.5 percent is reached, or the alcohol is removed from the finished beer after the conventional brewing process." The good news for drivers:

Even after a few glasses, there is no threat of a significant increase in the alcohol concentration in the blood, as a study by the University of Freiburg showed. However, some breweries also offer varieties with 0.0 percent.

ASSERTION: When it comes to beer consumption, Germans are in the lead throughout Europe.

With almost 83 million hectoliters, more beer was actually served in Germany in 2019 than anywhere else in Europe.

The volume produced in this country was also tops: 91.6 million hectoliters, of which nearly 16 million were exported. After all, eight of the world's 40 largest breweries come from Germany.

However, when it comes to per capita consumption, the tide turns:

With 142 liters, the Czechs were ahead of the Austrians with 107 liters in 2019. On average, every German drank 100 litres: third place. Far behind, on the other hand, rank Italians, French or Greeks.

ASSERTION: Beer is best enjoyed from a mug.

EVALUATION: Sommeliers advise against it.

The true connoisseur prefers a high-quality thin and translucent crystal glass - at least that's what beer sommeliers like Markus Raupach from Bamberg say. Because it does not have the right shape, a thick-walled stein can only reflect the special aroma of a variety to a limited extent. A Pilsner, for example, loses its typical character. In addition, it heats up more easily in an uncooled jug and thus becomes stale more quickly. A thin, smooth glass, on the other hand, ensures that aromas and carbon dioxide are retained. And another tip: Beer from the bottle should be taboo for gourmets, because most aromas are perceived by the nose when drinking.