Microplastics are not a packaging problem 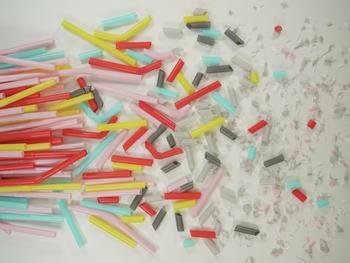 According to a study, people ingest around 5 grams of microplastic every week through food. That is equivalent to the weight of a credit card.

Microplastics have been on everyone's lips for a few years now and - as always - packaging is one of the main culprits for tendentious media and the uninformed public. The Swiss Packaging Institute SVI briefly summarises the known facts here: They show that microplastics are not a packaging problem.

Since the German Federal Environment Agency warned in 2015 of "risks to the environment and water bodies from the use of plastic particles in skin creams, peelings, shower gels and shampoos", microplastics have increasingly come into the focus of the media and the public. Some so-called quality media and various dubious environmental protection organizations, in their typical anti-reflection, initially blamed it mainly on gelittered packaging. Today, based on numerous serious scientific studies and assessments, we have long known that packaging has practically nothing to do with the problem of microplastics. Yet decades of packaging bashing have apparently left ineradicable notions in the minds of certain journalists and environmentalists.

How much microplastic ends up in the environment?

How dangerous is microplastic?

Currently, there is no completed scientific study of the health risks of microplastic particles for humans. Research is also in its infancy when it comes to the impact of microplastics on flora and fauna. In 2019, the Australian University of Newcastle published a shocking extrapolation from 51 global studies: according to this, a person ingests five grams of microplastics per week, primarily through food. This is equivalent to the weight of a credit card. However, there are major regional differences. The highest levels are found in the USA and Asia. An average value for Switzerland cannot be derived from the study. How much microplastic a person ingests depends on where they live, their living conditions and their diet.

Where does microplastic come from?

It is now clear that microplastics originate to a very small extent from packaging. Most microplastic comes from completely different sources, as the FOEN study from 2020 shows: Tyre abrasion is by far the largest source in terms of volume. The annual amount of tyre wear released in Switzerland is estimated at around 10,700 tonnes. From sports fields and playgrounds (e.g. artificial turf), 1120 t of microplastics are released annually via drainage and resuspension. Around 1000 t of microplastics are produced during the construction and demolition of buildings, and a further 320 t through the weathering of building façades. In addition to tyre abrasion, Swiss roads contribute around 930 t of abrasion from shoe soles, 770 t of abrasion from road markings and 330 t of abrasion from road sweepers. A significant proportion also arises from the washing of synthetic textiles: around 650 t of microplastic fibres enter the wastewater from Swiss washing machines. Total abrasion from industrial machinery amounts to around 420 t and abrasion from cleaning plastics to around 200 t. Finally, around 2700 t of macro- and microplastics are discharged into soils and waters each year through so-called littering. This mainly includes disposable tableware and agricultural film, but also packaging. It is not known exactly what proportion is attributable to packaging. Incidentally, cosmetics only account for around 15-20 tonnes per year.

Can microplastics in food and cosmetics originate from packaging?

No, basically not. There are practically no migratory free microplastics in the inner walls of packaging. At most, it is possible that consumers ingest plastic particles, for example by extremely scraping out plastic cups with a knife. There is no risk whatsoever when packaging is emptied in the normal way. If food and cosmetics are indeed contaminated with microplastics, then the microplastics originate exclusively from the contents.

Microplastics in the environment are a problem whose effects on humans, flora and fauna cannot yet be clearly named and quantified. It is clear that only a very small proportion of the microplastics released into the Swiss environment each year originates from littered packaging. And it is also clear that the amount of microplastics ingested daily by humans does not originate from the packaging, but from the contents, i.e. from contaminated food and cosmetics.