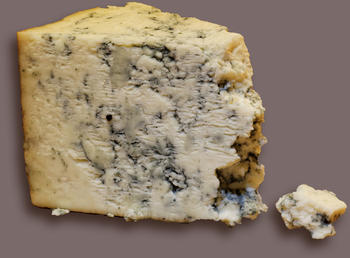 The makers of French Roquefort are up in arms because their blue cheese scored very poorly on a Nutri-Score rating. The health logo could mislead consumers into thinking that the cheese is therefore also very bad for their health, the producers said on Monday, as broadcaster France 3 reported. If the EU made such a nutri-score a requirement, it would have a devastating impact on sales, the producers warned. Roquefort would have to be exempt from the nutrient "traffic light". The rating involves categorising foods on a logo as A to E, depending on their health benefits, and marking them on a colour scale from green to red.

Although Roquefort is salty and fatty, the average daily consumption in France is only 30 grams, which is below the 100 grams required for classification, argued Jérôme Faramond, vice-president of the Roquefort Confederation. The positive effect of the sheep's milk used for the cheese is also not taken into account. 7000 tons of Roquefort are produced annually in the region around the town of the same name, 25 percent are exported, for example to Spain and Germany.

The Nutri-Score system developed in France includes not only sugar, fat and salt, but also recommended elements such as fibre, protein or proportions of fruit and vegetables. Points are awarded for the amounts per 100 grams in each case. The result is an overall score, which is shown on a scale: from "A" on a green field for the most favourable balance to a yellow "C" and a red "E" for the least favourable category of food. In 2020, the logo was introduced in Germany, as previously in France, on a voluntary basis.