Fluid mechanical analyses of the TU Vienna answer an old question: How does the so-called "teapot effect" occur? 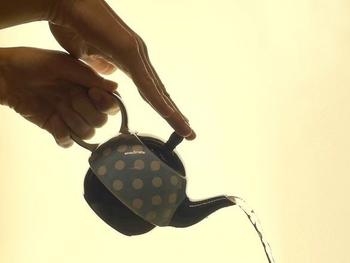 The "teapot effect" has already been the undoing of many spotless white tablecloths: If you pour a liquid too slowly from a teapot, then it can happen that the liquid stream does not cleanly detach from the teapot and find its way into the teacup, but instead runs down along the teapot.

This phenomenon has been studied scientifically for decades - now a research team at the Vienna University of Technology has succeeded in describing the "teapot effect" completely and in detail with an elaborate theoretical analysis and numerous experiments: An interplay of different forces ensures minimal wetting directly at the edge, and it is sufficient to redirect the flow of liquid under certain conditions.

An effect with a long history

The "teapot effect" was first described by Markus Reiner in 1956. Reiner earned his doctorate at the Vienna University of Technology in 1913 and then emigrated to the USA, where he became an important pioneer of rheology - the science of flow behavior. There have been repeated attempts to explain this effect precisely. Work on this subject was awarded the satirical "IG Nobel Prize" in 1999. Now the circle has been closed by examining the teapot effect again at Reiner's alma mater, the Vienna University of Technology - by a team led by Dr. Bernhard Scheichl, lecturer at the Institute of Fluid Mechanics and Heat Transfer and Key Scientist at the Austrian Centre of Excellence for Tribology (AC2T research GmbH), in cooperation with the Department of Mathematics at University College London.

"Although this is a very common and seemingly simple effect, it is remarkably difficult to explain exactly within the framework of fluid mechanics," says Bernhard Scheichl. The sharp edge on the underside of the teapot beak is crucial: a drop forms there, while the area directly below the edge always remains wetted. The size of this drop depends on the speed at which the liquid flows out of the teapot. If it falls below a certain speed, this drop can ensure that the entire jet is deflected around the edge and flows down the teapot.

"We have now succeeded for the first time in providing a complete theoretical explanation of why this drop forms and why the underside of the edge always remains wetted," says Bernhard Scheichl. The mathematics behind this is complicated - it involves an interplay of inertia, viscous and capillary forces. The inertial force ensures that the fluid tends to maintain its original direction, while the capillary forces slow down the fluid at the beak surface. The interaction of these forces is the basis of the teapot effect. However, the capillary forces ensure that the effect only occurs from a very specific contact angle between the wall and the liquid surface. The smaller this angle is or the more hydrophilic (i.e. wettable) the material of the teapot, the more the detachment of the liquid from the teapot is slowed down.

Interestingly, the strength of gravity in relation to the other forces at work does not play a decisive role. Gravity merely determines the direction in which the jet is directed, but its strength is not decisive for the teapot effect. The teapot effect would therefore also be observed when drinking tea on a moon base, but not on a space station with no gravity at all.

The theoretical calculations on the teapot effect were published by the research team in September 2021 in the scientific journal "Journal of Fluid Mechanics". Now experiments have also been carried out: Water was poured from an inclined teapot at different flow rates and filmed with special cameras. In this way, it was possible to show exactly how the wetting of the edge below a critical pouring rate leads to the "teapot effect", thus confirming the theory.