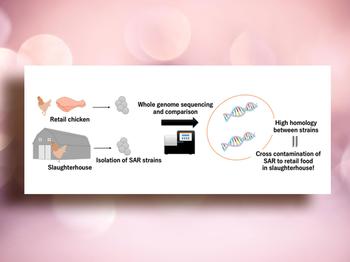 People must consume enough, safe, and nutritious food to remain alive and healthy. Consumption of unsafe foods, contaminated with harmful bacteria, viruses, parasites, or chemical substances, is responsible for more than 200 diseases, ranging from diarrhea to cancer. Diarrheal diseases are the most common illnesses caused by contaminated food, affecting 550 million people and killing 230 thousand people each year, globally. Even in developed countries, some bacterial foodborne pathogens threaten people’s life through ingestion of daily meals. Of concern is Staphylococcus argenteus—a bacterial organism that causes food poisoning. It was first discovered as a genetically distinct lineage in the Aboriginal communities in Australia. Since then, Staphylococcus argenteus has been isolated on other continents, indicating its global prevalence.

The researchers further profiled the Staphylococcus argenteus genotype, virulence factors, and level of antibiotic resistance. Using multiple-locus sequence typing (MLST), the ST2854 strain was the most predominant, accounting for 33% of all isolates. Other predominant strains were ST1223, ST5961, and ST2250 at 28.6%, 23.8%, and 14.3%, respectively. All isolates had Staphylococcal enterotoxin (SE) gene repertoires. In particular, the selx gene, which codes for the SELX protein. Astonishingly, one of the 21 strains tested for antibiotic resistance was resistant to penicillin, tetracycline, and doxycycline, while another one was only resistant to penicillin.

Furthermore, the researchers examined chicken-associated samples from two different slaughterhouses, one specializing in broiler chicken processing, and the other specializing in hen processing. A total of 357 samples were tested, including chicken feathers, chiller water, and facility swabs. Surprisingly, 14 strains of Staphylococcus argenteus were isolated from a single slaughterhouse. These isolates were found in the chiller water, swabs of knife handle, and cutting boards, as well as the chicken carcasses.

Upon genetic analysis of the slaughterhouse isolates, 13 isolates were assigned to the ST5961 genotype and one isolate to the ST5964 genotype. Toxin profiling and antibiotic susceptibility testing were also performed. Toxin profiling revealed the selx gene, in all isolates. Furthermore, additional sey genes, sel26 and sel27, were only found in ST5964, implying that these isolates originating from a slaughterhouse, may cause staphylococcal food poisoning (SFP). Surprisingly, all 14 isolates from the slaughterhouse were susceptible to antibiotics.

In an interview, Professor Masami Miyake, who supervised this research, said, “Basically, this investigation showed that chicken meat was highly contaminated with Staphylococcus argenteus, the bacteria that can cause human disease. Our molecular phylogenetics approach further exposed that meat processing plants may also have a role in germs being transmitted from the environment to food and vice versa.” The schematic illustration of their proposed Staphylococcus argenteus food contamination dynamics is shown in Figure 1. When we caught up in an interview with Dr. Yuki Wakabayashi, who was a doctoral student when he conducted this study, he added, “This is the first study that demonstrated the presence of S. argenteus in a food processing facility, and the possibility of bacterial contamination during food processing, should be taken into account.”

The article,Isolation and characterization of Staphylococcus argenteus strains from retail foods and slaughterhouses in Japan, was published on 16 February 2022 in the International Journal of Food Microbiology.