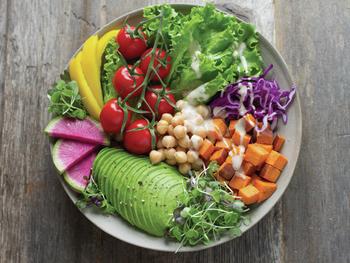 New research, co-authored by Bayes Business School, found that that the presence of individuals from different friendship or social groups played a role in influencing consumers’ food choices.

The study, which explored food choices with those of a different race and from a different university, explains this occurs because individuals anticipate more negative judgement from outsiders. The research, which spoke to around 1,000 individuals in total, shows that people often self-categorise in terms of their race, university affiliation, and work affiliation.

Experiments with several hundred adults in a large US city and university found participants were more likely to choose a healthy snack in the presence of an observer of a different race (as opposed to the same race) or one affiliated with a different university (as opposed to their own university). This was because they anticipated more negative judgment from an outsider group, and they therefore attempted to mitigate these judgments by making healthier food choices.

Four separate experiments supported the authors’ view that the presence of a stranger from a different social group (compared to a stranger from one’s own group – such as their own university) impacted the participants’ food choice.

The other experiments showed that the reason for this pattern is that people feel judged to a larger extent by outgroup members, and they strategically use healthy food choices to make a positive impression to counter this negative judgement. For example, 200 consumers were told that others around them were judgemental or were tolerant. In the judgemental environment, consumers were more likely to choose carrots over cookies than in the tolerant environment, which indicates that expected judgement from others explains the findings.

Last month the Action on Sugar and Obesity Health Alliance called on the UK Government to act against the difference in sugar content and portion size of popular snacks. Despite many attempts to help consumers make healthier choices, consumers often struggle to maintain a healthy diet. This research finds that one way to promote a healthy diet could be to advertise the social benefits of healthy choices.

“We know that food plays an important role in social life and consumers often make inferences about others’ traits and characteristics based on their food choices.

“Our research shows that we can use this important role of food for consumer welfare if we highlight that healthy food is not only good for consumers, but also helps them to impress others. These findings could be very significant to those hoping to improve healthy eating practices in the UK because they open a new avenue to promote the benefits of healthy eating: It’s good for you and your health, and it’s also good for making a positive impression.”