How food scraps will power airplanes in the future 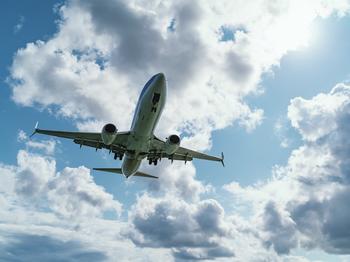 Photo by Kevin Woblick on Unsplash

In order to convert food scraps and other biological waste back into usable materials, the Fraunhofer Institute for Ceramic Technologies and Systems IKTS has joined forces with industry and research partners to build a plant in Thallwitz near Leipzig that is unique worldwide. This produces synthetic fuels and biogenic waxes from biogas - and not just from the CO2 it contains. The biogas is obtained from old fats from catering and food production. If required, a ceramic electrolyzer can be connected to provide the necessary materials for the process, also using electricity from renewable sources. IKTS now intends to further develop the innovative plant concept for industrial-scale production in cooperation with a Leipzig-based company.

With a view to more than 9000 biogas plants in operation in Germany, Dr. Erik Reichelt, head of the IKTS working group on systems process technology, sees considerable market potential: "Such expanded biogas plants open up considerable opportunities to build up new value creation and jobs in the central German coalfield already now for the time after the coal phase-out." In Saxony alone, he said, there are currently around 270 biogas plants in operation - and the new system is an interesting option for the larger ones in particular. It could help to operate the plants more economically and to react better to market fluctuations. In addition, the circular economy concept helps to conserve natural resources, reduce the use of fossil natural gas and oil, and protect the environment.

Yet the project's objective in 2017 had been much more modest. Originally, the development consortium wanted to make the biogas plants "only" more resilient to market fluctuations and feed-in tariffs by additionally upgrading them for wax production. The idea is that if it is not worthwhile to convert the biogas into electricity because of unfavorable prices, the operators can switch flexibly to the production of biogenic waxes with a little additional technology. This can then be sold to the cosmetics and lubricants industry. However, during the development process, the concept has expanded to include additional technology pathways that also incorporate grid efficiency.

To test these approaches in practice and build a pilot plant, the research institutes Fraunhofer IKTS, TU Bergakademie Freiberg and TU Dresden joined forces with the Saxon companies Ökotec-Anlagenbau GmbH, Sunfire GmbH and DBI Gas- und Umwelttechnik GmbH to form a development alliance. Ökotec-Anlagenbau made its existing biogas plant available. There, the partners additionally installed a reformer, a Fischer-Tropsch reactor and an electrolyzer. In the first step, the expanded plant feeds biogas and steam into the reformer, which produces synthesis gas from it - a mixture of hydrogen and carbon monoxide. The Fischer-Tropsch unit then converts this synthesis gas into methane, liquid hydrocarbons and wax. The methane is fed right back into the process to heat the plant equipment. What remains is the wax and the liquid products in a 50:50 ratio. The latter can then be further processed in refineries to produce synthetic diesel or kerosene.

As an alternative and additional source for the synthesis gas, a container is docked with the electrolyzer mentioned above. This is switched on when there is little biogas available or when there is a particularly high supply of electricity from solar or wind power plants. This electrolyzer breaks down water vapor and carbon dioxide into hydrogen and carbon monoxide, i.e. synthesis gas again. It also ensures a continuous supply to the Fischer-Tropsch synthesis plant, which only works really efficiently if there is always enough synthesis gas available.

A biogas plant equipped in this way thus has several options for responding to market fluctuations: The operator can continue to convert the biogas into electricity, for example by gas engine and generator, when electricity purchase prices are high. If feed-in tariffs are low, he switches to producing biogenic wax and synthetic fuels. And when plenty of renewable electricity is available, he switches on the electrolyzer.

The petroleum-free fuels and waxes obtained are still more expensive than corresponding fossil-based products. For example, the synthetic fuels and waxes have a production cost of around €2.50 per kilogram. However, the current energy price crisis has already greatly reduced the once immense cost differences compared with petroleum-based products. And even if we assume that prices on the oil and gas exchanges will fall again, the demand for sustainably produced energy sources and materials is growing in many sectors of industry. The airlines in particular are under pressure due to more restrictive environmental protection laws. The German government has announced plans to introduce significant blending of electrically generated kerosene (e-kerosene) with conventional aviation fuel as a mandatory quota from 2026.

Further demand could also come from other sectors in the future, for example from paint and coatings manufacturers, who could use the wax obtained to produce additives. There will also be enough customers in the cosmetics and lubricants industries, says Erik Reichelt. In this respect, biogas plant operators who quickly equip their operations with the new technology can be the first to meet this market demand for biogenic waxes. And if this submarket becomes oversaturated, the wax can also be liquefied into fuel using additional plant technology.

On the agenda now is the step from the pilot plant to the larger industrial scale. For this transfer phase, Fraunhofer IKTS is currently seeking funding from the structural change support program for the coalfields. In the next stage of the project, a plant capable of producing several hundred liters of synthesis products per hour is to be planned.