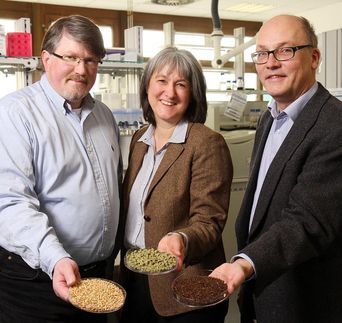 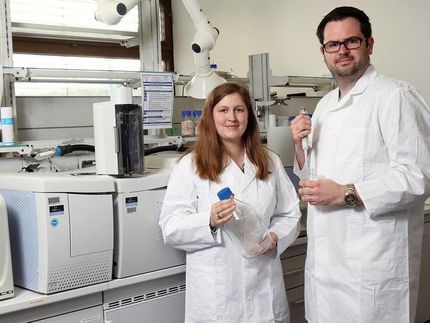 Daniela Becker and Jens Weiermüller are also involved in the project.

In 2016, every German drank about 104 liters of beer on average. During the preparation of this beer, a lot of residues are generated, approx. 400,000 tons per year throughout Europe. Only a small portion of those residues is used for animal feed. How this waste can be used sustainably, e.g. as raw material for the chemical industry or as a source for pharmacological active substances is what a researcher team of three departments of the Technische Universität Kaiserslautern (TUK) is investigating in the frame of a European project.

At the Achema, a trade fair for the process industries in Frankfurt, they will present their projects at the research stand of the federal state Rhineland-Palatinate from June 11-15 (hall 9.2, stand A86a).

Yeasts convert carbohydrates contained in the malt into alcohol and carbon dioxide during fermentation of the brewing process. Even if the microorganisms need further compounds from the malt to grow and reproduce, side streams accumulate nevertheless. These residues, so called brewer’s spent grain, still include large amounts of other valuable ingredients. This is the point where the project comes in: The research of three work groups of the TUK focuses on sustainable and resource-friendly use of brewer’s spend grain.

At the institute of Bioprocess Engineering, the team around Professor Dr. Roland Ulber, consisting of the PhD students Jens Weiermüller und Alexander Akermann, investigates which products can be obtained, when brewing residues are deployed as a fermentation medium. "We use multiple microorganisms such as fungi and bacteria", explains Alexander Akermann. During these processes, various chemical products can be produced, for example lactic acid, which might in the future serve as a feedstock for bioplastics for the industry.

In the field of inorganic chemistry, the research team around Professor Dr. Werner Thiel with the PhD students Ranja Saynisch and Pascal Weingart is working with fats, which are present in the brewers’ spent grain in high amounts. "They contain numerous unsaturated fatty acids, which yeasts does not need for fermentation", says Thiel. The chemists intent to identify those substances in more detail. In a next step, they want to prepare products for the industry. "It's possible to recover glycerin from fats, which then can be transformed to intermediary products for the chemical industry", the Professor continues. "It is possible, among other things, to gain precursors from unsaturated fatty acids for the plastics production. We are going to develop the required catalysts for this process."

The team from the department of food chemistry and toxicology around Professor Dr. Elke Richling and the PhD students Daniela Becker and Verena Kirsch will investigate substances and extracts obtained from brewers´ spent grain, for their biological activity. In the beginning, they have to be tested for their potential toxicological effects. "We need to reassure that these substances do not pose any risk to health", explains Kirsch. They will further investigate a possible impact on the humans' sugar metabolism. "There are some indicators that compounds of brewers ´spent grains prevent sugar absorption", Becker further explains. "We will study the exact influence of these substances." Perhaps one day it will be possible to affect the glucose metabolism through the insights gained. This is vitally important when treating diabetes.

Not only the TUK is involved in the "BIOVAL" project but also the universities from Lothringen, Liège and Saabrücken as well as the Luxembourg Institute of Health and the Belgium company Celabor. The European Structural Funds for Regional Development (EFRE) supports this project with EUR 1.84 million. The total budget is worth more the three million euros.