Do we still need field biologists? 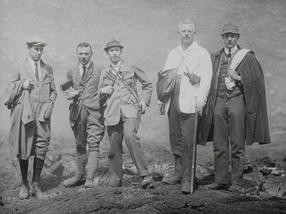 Due to digitisation, ecologists are working less and less in the field. Christoph Küffer believes that we should not rely solely on digital data, and puts the case for field research.

Just a few years ago, those embarked on a doctorate in ecology collected their data in the wild – sweating it out and battling with mosquitoes and rain. They spent all summer in the forest, the meadow or the mountains, selecting plant species, collecting insects and sampling soil.

In recent years, field research at universities has dwindled in importance. Increasingly, ecologists are collecting vegetation data with an airborne laser scanner, deploying model systems in the lab to fathom ecological mechanisms, and testing hypotheses by running big data analyses on the computer.

With such huge volumes of digital data nowadays, it’s easy to forget just how important field research still is for understanding ecosystems – and that scientists from the University of Zurich and ETH Zurich spearheaded the emerging field of modern ecology around 1900.

100 years of modern ecology at ETH

At the beginning of the 20th century, Zurich was one of the world's leading centres of early modern ecology, with the Geobotanisches Institut Rübel founded by Eduard August Rübel as its hub. This year, the Rübel Foundation, which is closely associated with ETH Zurich, is celebrating its 100th anniversary – for the most part silently. Reason enough for me to show you, by outlining three early research endeavours, just how relevant field biology is.

Interplay between vegetation and soil

“Ecological interactions in nature are complex. Only through detailed outdoor studies can we identify them at an early stage.” Christoph Küffer

Half a century later, vegetation expert Dieter Mueller-Dombois and soil ecologist Peter Vitousek met on the other side of the world in a tropical forest in Hawaii to investigate the influence of the invasive nitrogen-fixing tree Myrica faya on the extremely nutrient-poor volcanic soils. They documented how a new tree species can fertilise the soil within a few years and so turn the entire ecosystem upside down. Their Hawaii paper was to become a key publication in the ecology of global change.2

Ecological interactions in nature are complex and constantly changing. Only through detailed outdoor studies can we identify them at an early stage. And this holds true today.

From vegetation type to climate model

In the early 20th century, the Rübel Foundation coordinated International Phytogeographic Excursions3 where top ecologists from the USA, England, Scandinavia and Central Europe met regularly for weeks at a time to identify plant communities from different regions and to compare descriptions of vegetation types. This exchange of scientific ideas resulted in a vegetation classification system that is recognised the world over and crucial to global ecological research.

Even today, climate models rely on standardised vegetation classifications to determine interactions between the earth's surface and the atmosphere. On a smaller scale, in most countries, vegetation maps form the basis for planning new national parks and nature reserves or performing environmental impact assessments.

In the 19th century, Zurich botanists such as Martin Rikli, Otto Nägeli and Albert Thellung created the first floristic inventory of the Canton of Zurich. Already at that time they dealt with the change of the flora by humans. They classified non-native species on the basis of their dispersal behaviour and were intrigued by Zurich's urban flora.

In doing so, these Zurich pioneers were addressing questions that lie at the heart of today’s ecological research such as invasion biology and urban ecology. And had their analyses been published in English rather than German or French, it would not have taken a century for them to be recognised as a core work in the worldwide discussion on invasive species.4

The bedrock of ecological research

Nowadays many ecologists work in the lab or at their computers, and there’s certainly justification for this. But even in the age of digitisation, we cannot rely solely on modern methods and purely digital data – to interpret them accurately, we need an in-depth knowledge of interrelationships in the field.

As the three historical examples show, field research helps to detect changes in nature at an early stage, align computer models and planning instruments to the real world, and trigger creative ideas and new theories. We still need the expertise of field biologists who venture into the wild and apply their species identification skills to record in great detail all they observe.