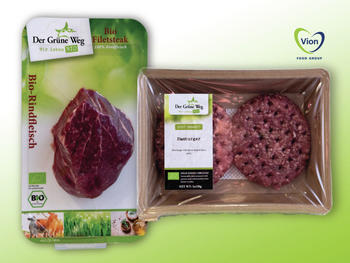 In Germany, the market share of organic meat increased by 13.8 percent to 31,284 tons last year. In response to this trend, Vion introduces their new product line for the German market at BIOFACH, the world’s leading trade fair for organic food, held from 12-15 February in Nuremberg, Germany. High quality organic beef and pork products will be available nationwide under the label “Der Grüne Weg” (The Green Way). The label is based on the successful Dutch brand for organic meat, “De Groene Weg”, a European market leader.

At the trade fair Vion will introduce a wide range of “Der Grüne Weg” products for the German market: organic beef options include ribeye, fillet, and tenderloin steaks, burger patties and minced meat. Of the ‘Quinoa meat pan’, which was presented at Anuga 2019, flavour variations ‘Bacon’ and ‘Curry’ will be also available as an organic option. Wiener schnitzel, fillet and both natural and marinated minute steaks are examples of organic pork products to be presented in Nuremberg.

The demand for organic meat is on the rise; growing more than 10 percent yearly in Germany, with even higher figures in Scandinavia and France. Vion has successfully been on the Dutch market for organic meat for years, with their brand “De Groene Weg”, gaining valuable experiences in the industry. The company distinguishes itself by working from a demand-driven, closed supply chain. This enables Vion not only to ensure the highest quality, but also to produce in an increasingly sustainable way.

At BIOFACH, on the joint stand of Green Organics and De Groene Weg (hall 9, stand 327), Vion will also present its new sustainable packaging concept, fitting with their organic products. The new packaging contains at least 60% less plastic and is entirely recyclable. Of the products made for Germany 85% is packed in trays made of recycled plastics.

All other “Der Grüne Weg” products will have packaging primarily made of cardboard. Part of the products is packed in material made partly of paper instead of plastic, in order to reduce plastic waste. With steaks, Vion now uses flat skin packaging and cardboard, which cuts plastic use by 60%. Individual packaging materials can be easily separated from each other and recycled with materials of the same kind. With these innovative concepts, Vion clearly underlines its high standards of sustainable production and thus proves to be a frontrunner in the industry.