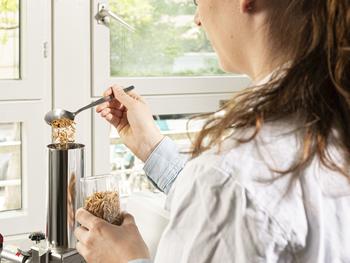 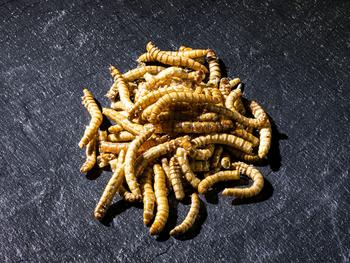 Mealworms (Tenebrio molitor) have a low environmental impact and a high protein content.

According to estimates by the Food and Agriculture Organization of the United Nations (FAO), global demand for animal proteins will double by 2050 as a result of population growth. Even if free agricultural land were to be developed, this demand could not be met by meat from livestock alone. Therefore, researchers at the Karlsruhe Institute of Technology (KIT) are investigating the production of new alternative protein sources. Their goal is to develop flours from insect powder that are suitable for bread production, for example.

Insects are an integral part of the diet in many crops, for example in Asia or South Africa. In Europe, they have so far been a niche food product. At present, industrial production focuses on mealworms (Tenebrio molitor), whose larvae contain many proteins. "Compared to beef, mealworms have the advantage that they produce about half as much CO2 and thus pollute the environment less," explains Dr. Azad Emin from the KIT. The process engineer heads the junior research group "Extrusion of Biopolymers" in the Food Process Engineering (LVT) section of the KIT Institute of Bio- and Food Technology.

As unprocessed food - for example as a snack - many consumers still reject insects. However, initial studies show that acceptance is increasing for products in which the insects are no longer visible. When processed into powder, an introduction to the German market via traditional foods such as bread, which continues to be one of the main energy sources, is conceivable, explains Emin. "Wheat flour with insect content can fortify the basic food with proteins and thus compensate for possible deficits from other protein sources.

To process the insects, food technologists use extrusion - a process that has long been used to produce pasta or cereals, for example. By adding water, a dough-like mass is created which is first guided over screw shafts, heated and finally pressed through a nozzle. The dry mass is then ground.

In order to achieve high consumer acceptance, the new flours should hardly differ from conventional baking flours in taste, baking properties and texture. However, since the higher protein and fat content in insect flours leads to changes in the dough, the researchers at the LVT are investigating these flours for their physical and functional properties such as solubility, water retention capacity or elasticity. The aim is to improve these properties in a targeted manner using the extrusion process so that they obtain the desired properties of baking flours.

"Another advantage of the process is the deactivation of enzymes and the reduction of microbial contaminants. In addition, improved digestibility could be achieved," says Emin. Since little is known so far about the effects of extrusion conditions on the digestibility and bioavailability of the nutrients contained in insects, the scientists are now investigating these in detail in cooperation with the Max Rubner Institute. Extrusion in conjunction with the development of new raw materials could also open up new perspectives for the traditional bakery trade, especially small businesses, also with a view to food trends. The cooperation with local companies also makes regional production and further processing possible.

"In our further research, we want to test the applicability of the flours produced on a handicraft scale. For this purpose, external bread tests will be carried out to investigate not only shape and appearance but also texture properties. In addition, we want to carry out personal interviews," reports Emin, emphasizing that the results obtained are important for the sustainable alternative development of insect food.

The investigations of the Karlsruhe scientists are part of the joint project "Functionalisation of insect-based flours by extrusion for the preparation of baked goods". The Federal Ministry of Food and Agriculture has been funding the project since 2019 for a period of three years. Other project participants are the Max Rubner Institute, the European Centre for Dispersion Technologies and Störrmühle GmbH.