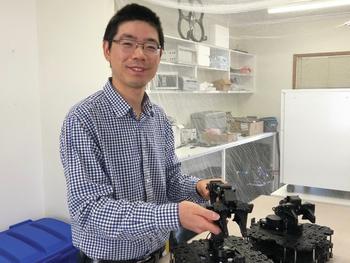 The different way plants grow in the world’s first solar glasshouse is the subject of a new Murdoch University research project which will deploy custom-built autonomous robot technology.

The glasshouse horticulture industry is worth $30+ billion ($US) per annum and allows growers to extend crop seasons and yearly growing cycles. The industry will play an increasingly significant role in sustainable food production for a growing global population expected to hit 9.5 billion by 2050.

To understand how plants grow differently in the ClearVue glasshouse has proved to be very labour intensive with people required to monitor and regularly record germination rates and speed, plant height, leaf number, flowering time and fruit colour and yield.

“These robots will be equipped with high-resolution cameras and sensors and will work day and night recording information on crop physiological characteristics and growing environments,” Dr Wang said.

“They will have a mobile base and be able to move around the room autonomously using modern advanced control and artificial intelligence-based navigation techniques. The cameras will continuously take images of the crops every certain period while the sensors will measure humidity, temperature and other changes in the environment.

“They will have the capability to collect data on the way plants are growing, as well as valuable information like chlorophyll content, flowering time, harvest time, fresh biomass, the rate of CO2 entering and H20 exiting the leaves, and leaf health.”

Professor Chengdao Li, one of the world’s top researchers on crop genetics, has oversight of the Murdoch glasshouse precinct and also wants the research project to compare growth rates between the ClearVue glasshouse and a standard glasshouse that sits alongside.

“This solar glasshouse facility is a world first. Everything is new and there’s a lot we don’t know about the impact of plant growth in this facility,” Professor Li said.

“Anecdotally, we can see that compared to a standard glasshouse, some crops are growing faster in the ClearVue glasshouse and others are growing slower. We need to understand why, get the data and then in future, we might be able to build bespoke solar glasshouses that provide absolutely optimal growing conditions for different crops.”

Research Associate Hao Luo said as part of the research project, the ClearVue and standard glasshouses would be set up identically and monitored for six months.

Dr Wang said the project was an example of a great collaboration between two Murdoch research institutes – Harry Butler and Food Futures.

Once we observe the differences between the solar and standard glasshouses, we can optimise our robot system and maximise productivity in the solar-powered glasshouse.

“We would like to implement our theoretical research into practical areas and this is a very promising area. We also believe the technique could be further extended to many other industries, including real-time livestock monitoring, bushfire monitoring, mining inspection and autonomous agriculture.”

Dr Wang’s research is one of 21 projects funded through the Research & Innovation Seed Grants for Murdoch early to mid-career researchers, with a total of $302,000 allocated.

“All the successful applicants put forward projects that we felt could develop into full-blown research programs over time - they just needed a kickstart and that’s what this funding program is looking to provide,” he said.