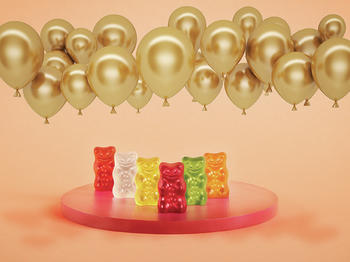 HARIBO is kicking off the new year with confetti cannons and party horns: in 2022, HARIBO Gold Bears will be 100 years young, and with them one of the most important inventions "Made in Germany". With the development of HARIBO Goldbären in 1922, Bonn-based candy maker Hans Riegel achieved a stroke of genius. As the first fruit gum product in bear form, the Gold Bears opened up a world market and laid the foundation for the international success of the young company at an early stage. Today, it is impossible to imagine confectionery shelves without HARIBO Gold Bears as a cult product. And at HARIBO, whose product range now includes over 1,000 products worldwide, the Gold Bears still hold a very special position. "The Gold Bears are our most precious family heirloom," says Hans Guido Riegel, Managing Partner of the family-owned company. "My grandfather invented them, and it is the task of all subsequent generations to nurture this legacy and develop it further with such care that it will continue to bring joy to people all over the world for many years and decades to come."

Inspired by the popular fairground attraction of the 19th century, Hans Riegel developed the ancestor of the Gold Bears with the "Dancing Bears" in 1922. At that time still made of gum arabic, the Tanzbären were a little larger and slimmer than today's Goldbären. However, cheerful, bright colors and fruity flavors were part of the DNA of HARIBO fruit gummy bears from the very first generation. In the 1960s, the slightly smaller but also rounder Gold Bears replaced the Dancing Bears. But it wasn't just the product itself that moved with the times: their packaging was also adapted to the zeitgeist of the 1960s. Since 1961, for example, HARIBO Gold Bears have been available not just as individual items, but together in a bag. Packaging elements such as the shiny gold foil or the viewing window set design standards back then that are still characteristic today. There was only one thing missing from the fruit gum bears shortly before the turn of the millennium: a smile. In 1995, HARIBO product designer Petra Wrede secretly smuggled the first smiling Gold Bear stamps into production. Just a few years later, in 1999, all HARIBO Gold Bears worldwide were beaming with an irresistible smile that makes young and old smile. From the Dancing Bear to their current form - the Gold Bears stand for HARIBO like no other product and have always remained true to their core: they always taste like childhood and will still do so 100 years from now. At the same time, their recipe is as closely guarded as the gold reserves in Fort Knox. The most important ingredients, however, are no secret: passion and childlike joy.

From Bonn out into the world

The Gold Bears are the greatest joy in the smallest form. Whether in Asia, the USA, South America, Europe or Australia, Gold Bears are now at home all over the world. Across national borders, around 160 million HARIBO Gold Bears are produced every day - lined up end to end, an annual production would circle the earth 10 times. No matter where in the world, if you were to approach random people and show them the Gold Bear shape, on average one in four could tell you it was HARIBO Gold Bears [1]. In countries such as Germany, Austria, Denmark or France, the Gold Bears even enjoy an awareness level of almost 100 percent. Shape and bite make HARIBO Gold Bears unmistakable and the sweetest style icon in the world. They stand for a colorful world, open, peaceful, happy; simply sweet. And they carry their good mood to the remotest corners of the earth. Under Hans Guido Riegel, the third generation to run the family business, the Gold Bears have finally become a global player and can be found on the confectionery shelves of over 100 countries.

The company is celebrating its product anniversary with a number of limited editions spread throughout the year. HARIBO fans, for example, can look forward to the HARIBO Childhood Bombshell right at the start of the year: a new Gold Bear mix with flavors from the 1980s, 1990s and 2000s. Cherry lollipops, cotton candy, fizzy drinks, Cola Orange, Jell-O and chewing gum invite consumers to travel back in time to their own childhood.

"Whether it's 1922, 2022 or 2122, the Gold Bears are a timeless classic and provide the greatest joy in the smallest form every day - across generations in over 100 countries around the world. For their 100th birthday, there will be a year-round 360° campaign inviting young and old to join in the celebrations - on TV, online, at the PoS, in Germany and internationally. HARIBO fans can look forward to many surprises that are just like the Gold Bears: colorful and packed with lots of childlike fun," says Holger Lackhoff, Managing Director Marketing, HARIBO D-A-CH. The Gold Bears will also be a central element of the TV advertising: In a new spot of the Kids' Voices campaign, the Gold Bears will be sung a very special birthday serenade. This provides entertainment during the commercial break right at the beginning of the year.

One of the secrets of HARIBO Gold Bears' success are the six iconic colors. These are to be celebrated in the anniversary year with a year-round birthday sweepstakes. Every two months, bear-strong prizes in one of each of the six Gold Bear colors await all lucky winners at www.haribo.com/geburtstag.