To achieve the 1.5 degree target, Arla doubles the CO2e reduction target in Operations 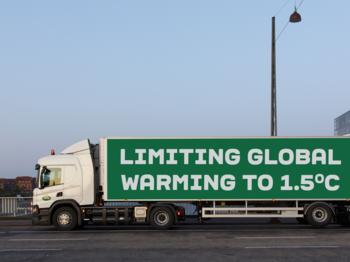 European dairy cooperative Arla Foods has received confirmation from the international, independent Science Based Targets initiative (SBTi) that Arla's new climate target in Operations (production and logistics) meets the conditions for limiting global warming to 1.5 degrees. The initiative is an internationally recognized standard for setting science-based emissions reduction targets for companies. In Operations, Arla recently significantly increased its climate target: By 2030, greenhouse gas emissions (CO2 equivalents = CO2e) will now be reduced by 63 percent instead of the previously planned 30 percent. To achieve this goal, Arla plans to switch to trucks without fossil fuels and to green electricity, as well as to use technical solutions with low energy consumption.

Having already introduced annual climate checks on around 8,000 cooperative members' farms across Europe to accelerate decarbonization at farm level, Arla is now stepping up measures in the areas of production and logistics. This is intended to further advance the fight against climate change.

The goal is to reduce greenhouse gas emissions from production, logistics and energy use by 63 percent by 2030. This doubles Arla's previous target to reduce emissions in these areas by 30 percent. Between 2015 and 2020, Arla has already reduced CO2e emissions in Operations by 24 percent. The next steps include gradually converting the milk tankers and distribution trucks to fossil fuel-free vehicles in the future and switching to electricity from renewable sources and technical solutions with low energy consumption at the production and office sites. The conversion will take place at different times in the individual European countries, depending on the infrastructure already in place, the general conditions and the availability of renewable energy sources. In Germany, for example, trucks powered by natural gas (LNG) are being used as a first step; the first vehicle is already in use. Compared with conventional diesel vehicles, they emit fewer CO2 emissions. If available, the plan is to switch to biogas at a later date. In Sweden, the Arla truck fleet has already been converted to vehicles without fossil fuels due to the infrastructure there.

After appropriate review, the Science Based Targets Initiative has now confirmed that Arla's new 2030 Operations target is in line with the reduction targets for so-called Scope 1 and Scope 2 emissions (explanation: see info box below) required to achieve the ambitious goal of the Paris Climate Agreement: to limit global warming to 1.5°C. Arla is one of only 61 food and beverage producers worldwide, and one of the first dairy cooperatives in the world, whose actions to achieve the 1.5 degree target have been audited and endorsed by SBTi. In Germany, Arla is the only producing dairy company with such an endorsement by the initiative.

"We are very pleased that the Science Based Targets Initiative has confirmed that our target is in line with the latest climate science to achieve the Paris Agreement goal. Dairy products are very popular around the world and demand is growing steadily. This is because they are not only versatile and affordable, but also rich in protein and calcium. Together with our cooperative members, we want to lead the way in decarbonizing dairy so that people can continue to trust and enjoy dairy products," says Peder Tuborgh, CEO of Arla Foods.

While the SBTi has deemed Arla's new 63 percent reduction target for Scope 1 and Scope 2 emissions consistent with the 1.5 degree target, Arla's existing 30 percent reduction target (by 2030) for Scope 3 emissions, which includes emissions on Arla farms, continues to meet the SBTi's criteria for ambitious value chain targets; in line with current best practices. SBTi is expected to issue a new sector guide for forestry and agriculture in 2022 - with more detailed requirements for science-based targets for companies in land-intensive sectors. "Our goal is to meet the 1.5 degree target path in all three sectors of our value chain, based on appropriate science-based targets. Therefore, once the SBTi's new sector guidance is published, we will assess whether changes to our current plans in Scope 3 are needed," says Hanne Søndergaard, Executive Vice President and Board Member for Agriculture and Sustainability at Arla Foods.

Arla will invest extensively in sustainability measures throughout the value chain as part of its new corporate strategy FUTURE26, unveiled in November 2021. As previously announced, Arla will increase its total investments by 40 percent to just over four billion euros over the next five years as part of the new FUTURE26 strategy. Sustainability is a key area of investment in this. In addition to the company's investments, Arla's farmers will also invest in their farms to reduce greenhouse gas emissions at farm level.

"Our farmers stand by their commitment to climate action. This requires them to make significant investments and changes in the way they work. As a result, we have ambitious plans for how we can generate value for our trade customers and consumers from their actions. In addition, we will continue to share our data and expertise with governments to show where funding made available to the agricultural sector can have the strongest impact," says Peder Tuborgh. Arla's farmers are already among the most climate-efficient dairy farmers. With the data from the climate checks and advisory services - combined with the results of regular on-farm research and trials for both conventional and organic milk - Arla continuously provides its farmers with new insights and solutions. In this way, the dairy cooperative helps farmers reduce their emissions and promote biodiversity.