Keep your hands away from black food 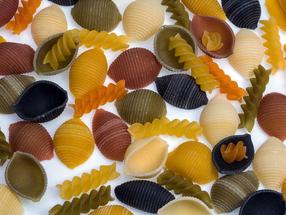 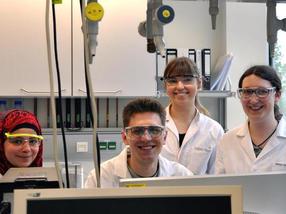 Burger rolls, noodles or water - black food is in vogue, especially among young people. The colouring is provided by additives such as activated carbon, a substance that is advertised as natural and health-promoting. Activated carbon is used to purify the body, detoxify skin and hair and whiten teeth. Students at Biberach University of Applied Sciences wanted to know more about what black food actually does to the human body, for example in connection with the intake of medication.

In concrete terms, a team of students from the Faculty of Biotechnology has investigated what happens when young women swallow a contraceptive such as the pill together with the trendy black drinks. This is because activated carbon has a very large, porous surface and is administered in acute poisonings to bind the toxins. Isabel Fouquet, Patrick Kopp, Iman Shrimo and Ramona Walder asked themselves the question: Does this mechanism also apply to the minipill and the material desogestrel it contains? Does activated carbon impair the contraceptive effect? The results of her experiment are clear - and "absolutely relevant for the public", says the supervising professor Dr. Katharina Zimmermann. She advises: "Keep your hands away from food containing activated carbon if you are taking medication at the same time".

The four students systematically approached the practical project: First, they researched that at least 80 percent of the active substance had to be absorbed for a contraceptive effect. The young scientists then investigated whether the pill can still be detected after taking small amounts of black water and whether a sufficient amount of desogestrel is available for the contraceptive effect.

In the test series, a standard tablet containing 75 micrograms of Desogestrel was dissolved in 50 milliliters of black water and the amount of free active ingredient not bound to activated carbon was determined. The same test was carried out with pure water as a crosscheck. Result: If the drug is dissolved in pure water, the active ingredient is very well detectable. On the other hand, no free active substance could be detected in the samples dissolved in water mixed with activated carbon: The remaining quantity was below the detection limit and thus, of course, below the quantity required for the contraceptive effect.

The young biotechnologists had expected that less active substance would be detectable; after all, they are aware of the effect of activated carbon. "However, we did not expect that desogestrel could no longer be detected," said Isabel Fouquet. "With their experiment, the students have uncovered a very serious problem that seems to play a role for all drugs taken at the same time, possibly even for vitamins," says Professor Zimmermann.

For this successful practical project she has received funding within the programme line "HUMUS Plus" (Hochschuldidaktisch Und Methodisch Unterstützte Selbstinitiierung
von Lernprozessen an HAW in Baden-Württemberg) of the Ministry of Science, Research and the Arts. In addition to the project of the Faculty of Biotechnology, two other projects of the Biberach University of Applied Sciences will be funded, as in 2018: In the Faculty of Business Administration, the application "Student Management Consulting" (Prof. Dr. Verena Rath, study course Energy Economics) as well as "Agile Service Learning Projects with Design Thinking and External Practice Partners" (Deputy Professor Dr. Isabell Osann, study course Business Administration - Construction and Real Estate) were supported. HBC will receive a total of around €10,300 from the HUMUS Plus grant.