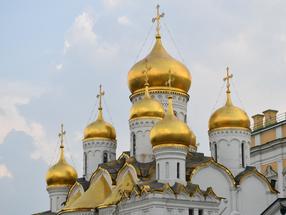 Russia reacted to the Western sanctions in the course of the Ukrainian conflict with an embargo on German and EU food. After five years, the economy is now taking stock - and sees winners. But there's also a big loser.

The German milk producer Stefan Dürr is able to gain a lot from the Russian embargo on food from the West. Its production facilities in Russia are flourishing. "I think a lot has really happened in these last five years. Many have used the sanctions to improve production," says Dürr, who has been head of the Russian Association of Milk Producers Soyuzmoloko since this year. The 55-year-old businessman from Walldorf (Baden-Württemberg) is Russia's largest producer of raw milk with his company Ekosem-Agrar AG. He is considered one of the winners since Kremlin leader Vladimir Putin issued sanctions against the West in August five years ago.

This was not just a return to the sanctions against Russia imposed first by the West in the course of the Ukrainian conflict.

From the outset, Putin set the goal of strengthening the nation, which at that time was still extremely dependent on food imports, so that it could provide for itself. On the fifth anniversary of the sanctions, Moscow's policy has been almost consistently successful. Nevertheless, the EU and the USA have also inflicted billions on Russia with their sanctions.

The dependence on imports has become significantly lower. In meat production, for example, the company's own share was 87.1 per cent in 2015 and 92.8 per cent in 2018. Agricultural production is now developing so well in many areas that Russia is positioning itself as an exporter, said Agriculture Minister Dmitry Patrushev recently. Russia has been the world's largest exporter of wheat for two years - well ahead of the USA.

German farmers have also largely come to terms with the blockade of agricultural trade with Russia. "Losing the Russian market was a major blow to German agriculture," said Werner Schwarz, Vice President of the German Farmers' Union. However, with time delay and great effort, new markets could have been opened up, especially in Asia. "Today, China, including Hong Kong, is as important to us as Russia was to agricultural exports, at almost two billion euros a year.

The food import ban imposed in August 2014 concerns fruit and vegetables, dairy products and meat products. And it applies to all states that have imposed sanctions on Russia - in addition to the EU and the USA, these include Canada, Australia and Norway. It was not until the summer that Putin had extended the sanctions again by one year until the end of 2020.

After a temporary shortage at the start of the embargo, the shelves are full to bursting today. Compared to 2014, the production of tomatoes and cucumbers increased by 80 percent to 1.1 million tons by 2018. The share of imports almost halved in the period from 60 percent to 38 percent. Not only fruit and vegetable cultivation, but also cheese production have increased. Nevertheless, apples and cheese are often not as good as EU products.

Milk producer Dürr says: "We have made considerable progress. But of course there's still a lot to do." Dürr itself is committed to standards in milk production, as in Germany.

Some miss French Camembert or Italian Parmesan. In many cases there are counterfeit products that have a distinctly reduced taste. However, resourceful traders offer smuggled goods openly at times, especially in the capital - albeit at significantly higher black market prices.

The big loser of the "Putin sanctions" is the consumer in Russia, as reported above all by media critical of the government. Citizens are annoyed by exploding food prices and stagnating or declining incomes. According to the Rosstat statistics office, meat and milk, for example, have become 30 percent more expensive over the past five years. Eggs, meat and poultry are up by more than ten percent compared to the previous year.

The reason for the price explosion is the lack of competition, write the newspapers Vedomosti and Nezavisimaya Gazeta. Because there is no more competition from products from the EU, the Russian top dogs could dictate the prices on the market.

Milk producer Dürr, on the other hand, sees another reason above all. "The rise in prices is not due to the embargo, but to the fact that the ruble has weakened," he told the German Press Agency in Moscow. Producers also state that machinery and feed additives, for example, have to be purchased abroad. The cost of this would then be reflected in higher food prices.

After initial difficulties - after all, European farmers still sold ten percent of their produce to Russia in 2013 - the EU has long since opened up other markets in the USA and China.

Sales fell by almost half to 6.4 billion euros in 2018 due to the disappearance of the Russian market. Many Russian food manufacturers have now come to a good arrangement - and did not show much interest in an end to the sanctions, it is said everywhere in Moscow. This is also due to concerns about possible new competition from cheaper EU products. However, Putin has recently also clearly said that he will lift the counter sanctions as soon as the EU also ends its punitive measures against Russia. But that's not in sight.

According to a survey by the opinion research institute YouGov in Germany, support for the sanctions is decreasing all the time. Only every fourth person supports them unreservedly. However, the German government recently stressed that the punitive measures could only end with a solution to the conflict in Ukraine.