Future perspectives of meat replacement from plants, insects and from the laboratory 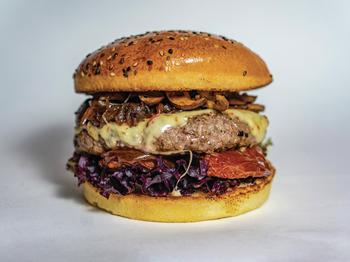 Photo by amirali mirhashemian on Unsplash

Meat substitute products such as vegetarian sausage, schnitzel or meatballs are becoming increasingly popular in Germany. In a study entitled "Meat of the Future", the Federal Environment Agency has now examined the effects meat substitutes have on the environment and health and what role they could play in a future diet. According to the study, meat substitutes on a vegetable basis, for example from soy, wheat or peas, perform best from an environmental point of view. Compared to beef, it produces up to less than a tenth of the greenhouse gases and uses many times less water and land. Insect-based meat substitutes come off slightly worse. In vitro meat is not yet available on the market, so the environmental impact is difficult to assess.

The study attests meat replacement a high potential in principle, but sees major obstacles in the political framework and acceptance. Dirk Messner, President of UBA, said, "Meat production is proven to harm the environment and contribute to global warming. Our study shows: Meat substitutes could play a major role in a more environmentally friendly and also healthier diet. But as long as the price of food does not reflect environmental damage, cheap neck steak will continue to be preferred to soya schnitzel for a long time to come. This is where politics is called upon to change these basic conditions."

Vegetable meat substitutes perform best compared to conventionally produced meat. One of the reasons for this is that plants such as wheat and soya can be used directly for human nutrition. If plants are first used as animal feed, significantly more plant calories and also significantly more arable land, water and energy are needed before the calories reach humans. For example, the production of one kilogram of soy-based meat substitute emits 2.8 kg of greenhouse gases. For pork, the emission is 4.1 kg, for poultry 4.3 kg and for beef even 30.5 kg.

Products made from edible insects are in second place from an environmental point of view. Their ecological balance sheet is worse than that of vegetable meat substitutes, but more positive than that of beef, pork and chicken, as insects can use feed more efficiently. The study calculates the greenhouse gas emissions for the production of one kilogram of insect-based meat substitute at three kilograms. Little is yet known about the health effects of these products - they often contain more protein than meat, but also carry a risk for certain allergy sufferers.

Statements on the environmental and health effects of in-vitro meat are difficult to make at present, as only theoretical assumptions on life cycle assessments have been available to date. According to these initial forecasts, in-vitro meat could perform better in terms of water and land consumption than conventionally produced meat, but worse in terms of energy consumption. Currently, in vitro meat is also produced for research purposes in culture media containing fetal calf serum, i.e. the blood of unborn calves. However, the use of an animal-free culture medium is crucial to the question of whether in vitro meat will be ecologically, ethically and healthily beneficial in the future.

From a health point of view, vegetable proteins and vegetable meat substitutes offer a possibility to reduce the meat consumption, which is too high in Germany with approx. 60 kg per capita and year. According to the EAT Lancet Commission, a maximum of 15 kg of meat would be healthy and sustainable. Plant-based meat substitutes perform best when they are little processed and packaged. A high degree of processing and additives in meat replacement products must be critically evaluated.

From an environmental point of view, meat substitutes offer a real alternative to meat. The growing consumption of meat and animal products worldwide and the bulk of current production processes cause considerable problems for the environment, animals and human health: the climate is being polluted because of the high greenhouse gas emissions from livestock farming and rainforest clearing for the cultivation of soya as animal feed, too many antibiotics are used in livestock housing and the conditions under which animals are kept are a cruelty to animals. Dirk Messner: "From an environmental point of view, it is essential to reduce meat consumption.

The market share of meat substitutes in the global total meat market has been very small so far, with an estimated share of 0.5 to 0.6% in 2017. In Germany the share is around 6%. While sales in the meat industry in Germany are relatively stable, forecasts show that worldwide sales will increase strongly in the coming years; much more strongly than the sales of manufacturers of meat substitutes. Only if meat alternatives, and in particular those based on plants, are promoted more strongly and their market share grows worldwide will they be able to contribute to a low-meat diet