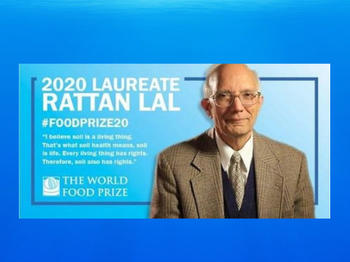 The “2020 World Food Prize” was awarded to the internationally renowned soil scientist Prof. Rattan Lal. The laureate is “Distinguished University Professor of Soil Science“ and Director of the “Carbon Management and Sequestration Center“ at The Ohio State University, Columbus, Ohio, USA. In 2015, Dr. Lal received an honorary doctorate of TU Dresden (TUD). Professor Lal has been closely associated with scientific activities in Dresden since the establishment of the FLORES Institute of the United Nations University. Until 2018, he served as Chair of the International Advisory Board of UNU-FLORES. Columbus, Ohio, home of The Ohio State University, is the official sister city of the state capital Dresden in the US.

The prize includes an 250,000 US-Dollar cash award endowed in 1987 by the Peace Nobel Prize laureate Norman Borlaug. The World Food Prize is regarded as the “Nobel Prize” in the field of food and agriculture. Doctor Lal received this distinction for his commitment to science over more than five decades and numerous scientific contributions to global food security, in particular connected to his holistic approaches to improve soil fertility on smallholder farms in the tropics. He has strengthened the consideration of soil as environmental medium and natural resource, both by the public and policy makers. Dr. Lal has established close links between soil health and other pressing issues such as water scarcity, climate change, and sustainable development.

In recent years, Dr. Lal gave several guest lectures in Dresden in the thematic field >> soil, sustainable land use, and climate change <<, e.g., in 2017 on the occasion of the 40-year anniversary event of TUD’s “Centre for International Postgraduate Studies of Environmental Management (CIPSEM)”. Moreover, he contributed strongly to the concept and scientific framing of the “Dresden Nexus Conference (DNC)“ in 2015 and 2017. In addition, a research collaboration with the soil scientists at the TUD Faculty of Environmental Sciences has materialized based on Dr. Lal’s engagement.