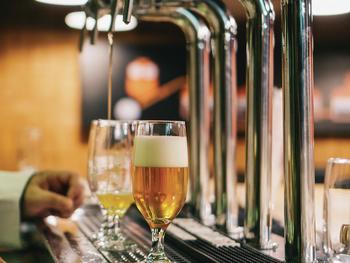 Photo by Fábio Alves on Unsplash

After the unexpectedly big thirst of the first guests, British pubs are slowly running out of beer. Demand in the first few weeks has "exceeded all forecasts", the boss of the largest pub chain Mitchell & Butlers, Phil Urban, told the Financial Times. "Suppliers are not able to get behind quickly enough." He said they had now started to bring their own stock into the busiest pubs.

Pubs and restaurants have been allowed to serve patrons in outdoor areas in England since April 12, and in Scotland and Wales since earlier this week. The sunny weather of recent weeks and the relaxed contact restrictions have since ensured full beer gardens on many weekday evenings too. According to analysis by Oxford Market Watch, sales in the first week of the relaxations in England were almost 12 per cent higher than the same period in 2019 - although so far only outside pubs have been allowed to open.

Budweiser Brewing Group UK & Ireland, which makes Stella Artois and Camden Hells, among other beers served in many pubs, currently brews around the clock, according to the Financial Times report. Smaller, independent breweries, on the other hand, often do not have enough staff to massively ramp up their production./swe/DP/zb (dpa)