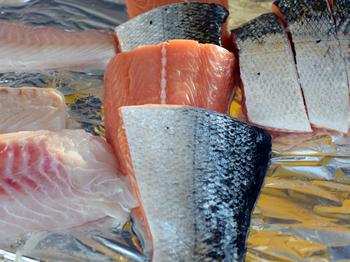 Fish fillets are not a new invention, even if they come from specially fed animals. The opposition division of the European Patent Office (EPO) on Tuesday cancelled patent protection for salmon and trout, whose meat is rich in omega-3 fatty acids due to the way they are fed. The patent no longer contains claims relating to the fish or products such as oils, EPO spokesman Rainer Osterwalder said. The patent now relates to fish feed and the process for producing it, as well as to a breeding process, he said.

The organisation "No Patents on Seeds", together with an alliance of more than 30 organisations, had filed an opposition against patent EP1965658. They demand fundamental corrections in patent law.

It is not impossible that similar patents will be granted again, warned Christoph Then of the initiative. He said the decision was an important success. "But the basic problem remains," said also Georg Janßen, federal director of the Arbeitsgemeinschaft bäuerliche Landwirtschaft. With patents on barley and beer, bush melons, lettuce or fish, he said, the EPO was going against the interests of society. "The new federal government, together with the governments of the other contracting states, must take action to put a stop to this."

In the Australian Scientific and Industrial Research Organisation's (CSIRO) fish patent, salmon and trout fed, among other things, on roughage have increased levels of omega-3 fatty acids - similar to wild-caught fish.

Comparable values reached in aquacultures otherwise only with fish meal fed fish, which are not considered as sustainably produced, said Then.

According to Then, patents on the feeding of chickens, pigs and fish had already been applied for in the past, which were to extend to cutlets, ham or fish fingers produced from them.

After this had been made public, most of the applications had not been brought to the examination stage of the EPO./sd/DP/nas (dpa)