Plant-based seafood innovation is heating up 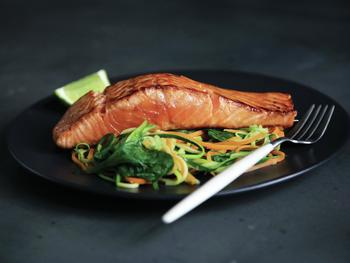 Photo by Caroline Attwood on Unsplash

With Veganuary 2022 in full swing, our food and drinks experts based in London, Dusseldorf and Chicago pick their top vegan trend to look out for in their region this year and beyond.

Why the next oat milk will have sustainability at its heart

Potato milk has the potential to displace oat as a more sustainable dairy free milk alternative, without asking consumers to compromise on nutrition, price or taste. The next plant-based milk will have sustainability at its core. Consumers switch from dairy milks to plant-based because of their better environmental credentials, above taste and price. This is especially true for young consumers, who consume less animal proteins primarily to help the environment.

Oat milk sales grew by $117million (€100 million) in the eight months to August 2021 according to IRI data. Half of that growth came from taking share from other plant milks, following media coverage on oat milk being the most sustainable milk alternative.

Potatoes are a very niche ingredient in the plant-based milk category (representing on average less than 0.2% of launches according to Mintel GNPD). However, high profile launches like DUG’s potato-based drink could boost interest for the plant-based ingredient.

DUG highlights that oat and potato milk have comparable carbon and water footprints, but potatoes are twice as land-efficient as oats. Potato milk can also help convince consumers that plant-based milks bring affordability as well as nutrient density. Price is still the number one purchase barrier for the plant-based milk category and according to DUG, potato milk is a familiar affordable ingredient that is also free from 14 most common allergens, low in saturated fats, low in sugars and enriched in calcium, vitamin D, riboflavin, vitamin B12 and folic acid.

Plant-based seafood innovation is heating up

There are several factors that contribute to consumer interest in fish alternatives, beyond the health benefits of plant-based eating. Fish substitutes can address environmental and ethical concerns. This includes overfishing, as well as concerns around labor practices (e.g. peeling shrimp), environmental pollution (including microplastics), and diseases that affect farmed fish communities.

In the future, plant-based seafood products can also find a niche in imitating species that are rare, endangered, or more difficult and expensive to collect, clean and transport – like sea urchin, bluefin tuna, sturgeon or fish roe.

These alternative crab cakes from Good Catch contain 20g of plant protein and have a “crabmeat-like texture and seafood flavor seasoned with sweet peppers, green onions, parsley and a kick of spice”.

‘Snackification’ could become a key catalyst in driving further growth for meat alternative sales in Germany in 2022. Snackification is the act of replacing traditional meals with snacks spread throughout the day. The meat alternatives market in Germany is becoming increasingly saturated with products targeting main mealtimes (e.g. burgers), hence, smaller snack formats could unlock new eating occasions with flexitarians.

Although over half of German snackers snack at least once a day, the topic remains unexplored for many meat alternative brands. Younger consumers, especially the 16-24 year-olds, present a key opportunity in Germany: nearly six in ten of them snack instead of having a proper meal at least once a week, and they also drive the demand for eco- and health-friendly plant-based foods.

Meat alternative snacks need to deliver qualities that make them a worthy and flexible alternative to meals. Beyond organoleptic properties such as flavour, texture and colour, features such as high satiety and nutrient density (i.e. the ratio of beneficial nutrients to calories) should be focus areas. Meat alternative snacks can elevate on-trend ingredients such as pea protein that keep you satiated and improve nutrient density. Moreover, hunger-busting themes for break time occasions in the marketing message warrant attention (e.g. ‘Have a break, have a KitKat’).

In 2021 the German meat alternatives market leader Rügenwalder Mühle tapped into the snackification trend by launching a shelf-stable vegetarian salami snack, which is a source of protein and rich in unsaturated fatty acids. It competes with meat snack brands for consumers who seek to moderate their meat consumption.