USA fly in more baby food via Ramstein due to shortages 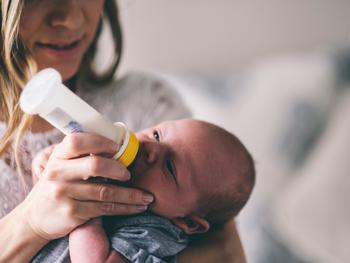 Due to dramatic shortages in the U.S., the U.S. government is flying in more infant formula through its Ramstein Air Force Base in Rhineland-Palatinate. The U.S. government announced Sunday evening a second flight from Ramstein to the U.S. in the coming days. The plane will fly baby food from the Swiss manufacturer Nestlé to the U.S. capital Washington and from there to a Nestlé plant in the state of Pennsylvania, the White House said. Then the special infant milk formula for babies with cow's milk allergies would be redistributed by a logistics company in the United States.

On Sunday, a military plane had flown from Ramstein to Indianapolis in the U.S. state of Indiana with a first shipment of special baby food. U.S. President Joe Biden wrote on Twitter during his trip to Asia that more than 70,000 pounds (nearly 32 tons) of infant formula was on board the first military plane. "Our team is working around the clock to get safe baby formula to everyone who needs it."

The background to the shortages is the failure of a factory owned by Abbott, the largest infant formula manufacturer in the United States. Abbott had recalled several product lines after four infants became ill and two died, possibly because of bacterial contamination. Production at one of the company's plants in Michigan State was halted for the time being in February.

Biden has made the shortages a top priority, including activating a law meant for wartime to boost production. The White House said Sunday night that based on that law, Abbott and another manufacturer would be given priority in ordering ingredients for baby formula. For example, Abbott would be able to order raw materials such as sugar and corn syrup with priority despite shortages in supply chains.

In addition, last week Biden had declared "Operation Fly Formula" (roughly, "Operation Baby Food Fly"). The White House said that because of the urgency, military aircraft from Ramstein would be used initially, as no commercial flights were available over the weekend. In the future, however, most deliveries would be handled by commercial planes.

Abbott Chief Executive Robert Ford had expressed regret Saturday about the bottlenecks and the consequences. "We're sorry for every family we've let down since our voluntary recall exacerbated the shortage of baby formula in our country," Ford wrote in guest editorial in The Washington Post. Still, he said, they believe the recall was the right thing to do. "We will not take chances when it comes to children's health." He said it was known that because of a lack of Abbott special foods, some children who could not digest other foods and milk had ended up in the hospital. "This is tragic and heartbreaking."

Ford announced measures to overcome the shortages. The production of these special foods will be given the highest priority, the Abbott chief wrote. The affected families would be helped with a $5 million (4.73 million euro) fund, he said. In addition, another Abbott plant that normally makes products for adults has now been converted to baby food, he said.

In addition, baby food is being flown in from a factory in Ireland. The Michigan plant is expected to reopen the first week of June. Abbott is also investing in measures to prevent such shortages from occurring again./cy/DP/stk (dpa)