Hunger for steak and soy fired fires in the Amazon region 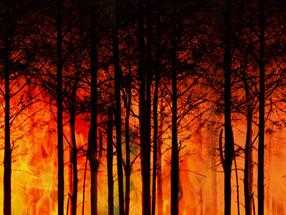 The images of the burning rainforest in Brazil cause consternation all over the world. Although the fires rage thousands of kilometres away from Germany, the catastrophe on the other side of the Atlantic also has to do with consumer behaviour in Europe. Above all, the ravenous appetite for juicy steaks and hearty chops fires the deforestation and slash-and-burn of large areas in the Amazon region.

"Of course, our actions in Germany also have a lot to do with the loss of the rainforest," says Matin Qaim, Professor of World Food Economics at the University of Göttingen. "For example, we import large quantities of soy as feed for our cattle and pigs, and increasing soybean cultivation is contributing to rainforest clearing in Brazil.

The Amazon region is a fascinating ecosystem and the green lung of the world, but also a gigantic resource treasure that awakens desires: In the rainforest you can earn good money with beef and soy, energy and gold. According to a study by the World Bank, farmers in the Amazon region in particular can operate much more profitably than in other regions.

According to environmentalists, farmers have set the latest fires in the Amazon to create new pastures for their livestock or fields for soy cultivation. Usually, already cleared forest areas are set alight to burn the undergrowth and the tree stumps, as the nature conservation organisation Greenpeace explains. Because it is currently unusually dry in the region, the fires also spread to intact forest areas and continue to spread.

The Food and Agriculture Organization (FAO) blames the conversion into pastureland for 80 percent of the rainforest losses in the Amazon region. In recent years, meat production in Brazil has exploded - around 200 million cattle now live in the largest country in South America. According to an analysis by the Foodwatch organisation, exports have risen by more than 700 percent over the past 14 years. Today, Brazil is the world's largest exporter of beef.

What is cultivated on the huge pastures and fields in Brazil also ends up on the plates in Europe. According to the EU Commission, Brazil is the largest exporter of agricultural products to the European Union. Last year Brazil sold €14.5 billion worth of agricultural products to the EU. The recently agreed free trade agreement between the South American economic alliance Mercosur and the European Union could make it even more so in the future.

"By signing the free trade agreement with the Mercosur states, Germany and the European Union are making themselves complicit in the devastating forest fires," says Klemens Paffhausen, Brazil Adviser to the Catholic Latin America relief organization Adveniat. "The promised lower tariffs on imports of beef and soy from South America will lead to more deforestation and more acreage."

France and Ireland are now threatening to block the Mercosur Agreement in the face of massive deforestation in the Brazilian rainforest. Federal Environment Minister Svenja Schulze (SPD) demanded protection guarantees for the Amazon region. The EU Commission also wants to use the Mercosur deal to put pressure on the government of Brazilian President Jair Bolsonaro.

The EU is the third most important market for Brazilian beef. According to the Association of Brazilian Meat Exporters (ABIEC), some 118 000 tonnes of beef worth 640 million euro went to the EU last year.

However, Europeans are lagging far behind the main customers China and Hong Kong. Only around 5 700 tonnes of beef from Brazil recently went to Germany.

Even more important is the soy business. Brazil is now the second largest producer of green beans. Most recently, 117 million tons of soybeans were harvested in the South American country. Here, too, the lion's share goes to China - and there could be even more because of the trade conflict between Beijing and Washington.

According to climate researcher Richard Fuchs of the Karlsruhe Institute of Technology, consumers should be asked to pay in order to do something about the deforestation of rainforests for new fields or pastures. "Meat consumption must fall," he recently told the German Press Agency. "The EU states could tax meat from animals fattened with soy from rainforest areas at a flat rate. This would include the environmental consequential costs."/dde/DP/fba