For a drink at the fully automatic robot dispensing system

KUKA Roboter in action in the world's only robot bar 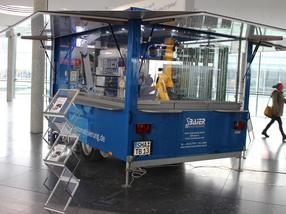 In the fully automatic dispensing and mixing system from BAIER Engineering GmbH, a KUKA robot reliably feeds drinks like a barkeeper. 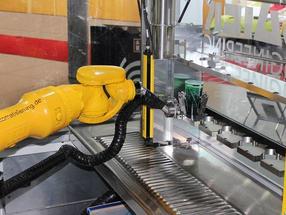 He can tap up to 20 glasses of beer per minute with a special attachment - without spilling a drop: In the fully automatic dispensing and mixing system from BAIER Engineering GmbH, a KUKA KR 16 robot, now part of the KR CYBERTECH family, reliably prepares drinks like a barkeeper.

With the Schank-Robot BAIER Engineering GmbH has developed the world's first fully automatic dispensing system. The system was developed in cooperation with Aalen University and specialists from the beverage industry. A KUKA KR 16 robot, now part of the KR CYBERTECH family, is used as the barkeeper: the bar robot mixes cocktails, taps drinks, serves and collects cash. "The dispensing robot is an eye-catcher and dispensing professional at the same time," says Thomas Baier, founder and managing director of BAIER Engineering, describing the special characteristics of the professional robot bar.

The software and technology for the dispensing system were developed by BAIER Engineering, the robot arm by KUKA. As soon as an order is received via the touch screen, the robot arm picks up the matching cup. He fills it at the dispenser and serves the drink at the counter. Cocktails, draught beer, non-alcoholic soft drinks - the range of drinks can be individually programmed according to the event. Payment is made using special chip cards - which the bar robot also uses to check whether the guest has reached the minimum age for the selected drink.

Robot bar is ready for use at any time

The advantages of the dispensing system are obvious. Whether for three days at a trade fair or during the night shift at a company event, the KUKA robot is ready to work around the clock as a barkeeper. At the same time, its performance does not decrease. "Our dispensing robot mixes cocktails and taps beer of consistent quality. It works cleanly, reliably and efficiently," explains Baier. Since the dispensing system stands on a single-axle trailer, it is very mobile. The cold store is integrated, only a power connection is required. At the same time, the design of the trailer ensures operational safety. The robot bar can be used at many events - from event gastronomy to special birthday celebrations to folk festivals.