Why the corn sometimes falls far from the stem 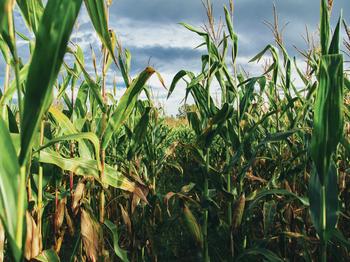 Photo by Jesse Gardner on Unsplash

For the first time, scientists decoded the European maize genome. In comparison with North American maize lines, they discovered differences that may contribute to the heterosis effect. A better understanding of the effect could enable breeding with higher yields. These findings could be particularly valuable for maize cultivation in areas with low yields and for future challenges posed by climate change.

Corn has a long history of development. When the inhabitants of Mexico began domesticating corn around 10,000 years ago, they created the basis for one of today's most important sources of food for humans and animals. With Columbus, the plant embarked on a journey from America to Europe. Just as humans migrated, maize adapted to new growth and climatic conditions around the globe through breeding.

Due to the historical mixtures, today's corn lines are not only different from each other in appearance, but also in their genetic make-up. In 2009, the first corn genome of the North American line "B73" was decoded. However, this reference sequence only covers a small part of the global maize genome (pan-genome) and can only be used as a point of comparison for European lines to a limited extent. In order to improve maize breeding and adapt to climate change, basic research on the genome of other maize lines is necessary.

So-called "Knob" regions (condensed chromatin regions in the maize DNA) also differ greatly in the maize lines. Knob regions have effects on neighbouring genes. Where Knobs are more pronounced, surrounding genes are not read. This causes the genes to lose their function.

Possible cause for heterosis
"We assume that the differences in the gene content and in the regulation of individual genes as well as the influence of Knob regions could be causes for the heterosis effect", says Prof. Klaus Mayer from Helmholtz Zentrum München, who is also honorary professor of the TUM School of Life Sciences at Technische Universität München.

One speaks of heterosis when the offspring from crossbreeding are significantly larger and produce higher yields than the parents. The principle behind it: If the genes of the parent generation, which for example are responsible for the size of the corn plant, are not present in certain regions or cannot be read off, this would affect the growth height of the offspring. By crossing with a line in which this deficit is not present, this can be compensated for in the subsequent generation. "This results in larger plants with higher yields without the parents having these characteristics. This effect can produce double the yield in some crosses. Although it has been used in breeding for a long time, the genetic and molecular basis of heterosis is not yet fully understood," says Prof. Chris-Carolin Schön, head of the Department of Plant Breeding at the TUM.

"In the next step, we will further investigate our assumption that there is a connection between the differences in gene content, Knob regions and heterosis in maize. To this end, we will not only look at the genetic material of the maize lines, but also keep our eyes open for possible epigenetic processes that influence the functionality of the genes," adds Klaus Mayer.

If the assumption is confirmed, the heterosis effect could be used in future in an even more targeted way in maize breeding. For example, areas with low yields could then benefit from heterosis. These findings could also become important in view of a growing world population and climate change, which is making life more difficult for agriculture.

About the study
The study was conducted under the direction of Helmholtz Zentrum München, Department of Genomics and Systems Biology of Plant Genomes. It was conducted in cooperation with the TUM School of Life Sciences, the Leibniz Institute of Plant Genetics and Crop Plant Research (IPK), the University of Bonn and KWS SAAT SE. The study was financed by the Federal Ministry of Education and Research (BMBF) and the Bavarian State Ministry for the Environment and Consumer Protection (BayKlimaFit project network).