Meatballs might wreck the anti-cancer perks of tomato sauce 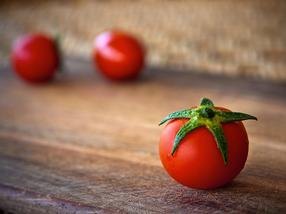 Ohio State research found that iron-rich foods such as red meat could strip away some anti-cancer benefits of tomatoes.

Eating your tomato sauce with meatballs piled on top could have a surprising downside, new research suggests.

Some of the anti-cancer benefits of tomatoes, specifically those from a compound called lycopene, could disappear when they're eaten with iron-rich foods, according to a new study from The Ohio State University.

Researchers analyzed the blood and digestive fluid of a small group of medical students after they consumed either a tomato extract-based shake with iron or one without iron. Lycopene levels in digestive fluid and in the blood were significantly lower when the study subjects drank the liquid meal mixed with an iron supplement, meaning there was less for the body to use in potentially beneficial ways.

"When people had iron with their meal, we saw almost a twofold drop in lycopene uptake over time," said the study's lead author, Rachel Kopec, an assistant professor of human nutrition at Ohio State.

"This could have potential implications every time a person is consuming something rich in lycopene and iron – say a Bolognese sauce, or an iron-fortified cereal with a side of tomato juice. You're probably only getting half as much lycopene from this as you would without the iron."

Iron is essential in the diet, performing such critical functions as allowing our bodies to produce energy and get rid of waste. But it's also a nutrient that is known to monkey with other cellular-level processes.

"We know that if you mix iron with certain compounds it will destroy them, but we didn't know if it would impair potentially beneficial carotenoids, like lycopene, found in fruits and vegetables," Kopec said.

Carotenoids are plant pigments with antioxidant properties responsible for many bright red, yellow and orange pigments found in the produce aisle. These include lycopene, which is found in abundance in tomatoes and also colors watermelon and pink grapefruit. Scientists have identified several potential anti-cancer benefits of lycopene, including in prostate, lung and skin cancers.

The small study, which included seven French medical students who had repeated blood draws and digestive samples taken from tubes placed in their stomachs and small intestines, took this research out of the test tube and into the human body, allowing for a better examination of human metabolism in action, Kopec said.

It's unclear precisely what is happening that is changing the uptake of lycopene, but it could be that the meal with iron oxidizes the lycopene, creating different products of metabolism than those followed in the study.

"It's also possible that iron interrupts the nice emulsified mix of tomato and fats that is critical for cells to absorb the lycopene. It could turn it into a substance like separated salad dressing – oil on top and vinegar on the bottom – that won't ever mix properly," Kopec said.

Researchers continue to work to better understand lycopene's role in fighting cancer, and the importance of its interplay with other compounds and nutrients.

"Nutrition can play an important role in disease prevention, but it's important for us to gather the details about precisely how what we eat is contributing to our health so that we can give people reliable, science-based recommendations," Kopec said.