Bitter peptides in calcium-rich dairy products, such as quark or skyr, come from starter cultures 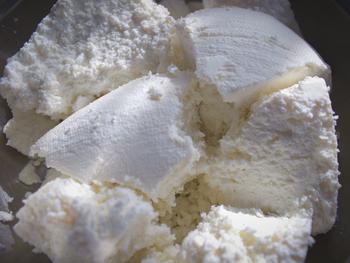 Fresh cheese products with a high calcium content, such as quark or skyr, can develop a bitter taste during their production, which leads to consumer rejection. In a project at the University of Hohenheim in Stuttgart, three research groups investigated how this bitter taste can be prevented. For a long time, the calcium concentration was regarded as the trigger for the formation of so-called bitter peptides during fermentation. However, the researchers conclude that this alone does not seem to be the cause. Rather, it is probably the interaction of calcium content and starter cultures. By selecting suitable mixtures of bacterial cultures for fermentation, it might be possible in future to reduce the bitterness of the finished product or perhaps even avoid it altogether. The project was funded by the German Federal Ministry for Economic Affairs and Energy (BMWi) with a total of almost 450,000 euros, making it one of the heavyweights of research at Hohenheim.

Germans love fresh cheese in all its forms. However, fermented dairy products such as cream cheese, quark or skyr, but also semi-hard cheeses and yoghurt, can contain bitter substances that cause bittersensitive consumers to reject them.

So-called bitter peptides are responsible for the bitter aroma. These are small protein fragments that are formed from larger proteins with the help of special enzymes called peptidases. "These fragments respond to our bitterness sensors on the tongue. This is why these foods are not spoiled, they just don't taste as good to bittersensitive people," explains Prof. Dr. Herbert Schmidt from the Department of Food Microbiology and Hygiene at the University of Hohenheim.

It is still unclear whether these peptidases originate from the added lactic acid bacteria or come from the milk - either because they are produced by the cow and released into the milk or because they enter the milk through contamination with other bacteria.

And why do bitter peptides mainly occur in products that have a high calcium content? These are questions that three research groups at the University of Hohenheim have investigated in a joint research project.

"The aim of our research project was to understand how bitter substances are released during the production process and what factors can be used to reduce this," said Prof. Dr. Jörg Hinrichs from the Department of Dairy Science and Technology.

Products of the work of lactic acid bacteria

Fermented milk products are created by the work of lactic acid bacteria. They are added to milk or milk concentrates as so-called starter cultures and convert lactose into lactic acid and other substances. In most cases, manufacturers also add a small amount of rennet to improve the coagulation of the milk. This causes the milk protein to flocculate and can then be separated from the liquid part of the milk, the whey.

However, the lactic acid bacteria also need the protein contained in the milk for their own nutrition. They split larger proteins into smaller pieces so that they can be absorbed into the cell. There, the peptides are broken down even further and can then be used by the cells for their own protein metabolism. However, if too many of these fragments remain in the milk product, they can cause a bitter taste.

The formation of these bitter peptides during the fermentation process is a complex interaction between different milk components and the genes or enzymes of the bacteria. In order to better analyse these interactions, the scientists worked with different model systems, some of which were newly developed.

For example, a newly developed concentration and filtration process makes it possible to specifically change and adjust the composition of the milk concentrate before fermentation. "Unlike the classic production process, we first extract the whey and only then ferment the milk concentrate," explains Prof. Dr. Hinrichs. "This method allows us to variably control the fat, calcium and protein content and thus simulate different compositions."

Using this fresh cheese model, the scientists analyzed the effects of different fermentation conditions on the formation of bitter peptides, such as temperature and pH, as well as different bacterial cultures.

A number of lactic acid bacteria are used in the production of fresh cheese products, most commonly Lactococcus lactis. "The starter cultures used for fermentation are almost as diverse as the dairy products on the market," says Prof. Dr. Schmidt.

In addition, as with almost all bacteria, there are different lineages with different properties, known as strains. "In one culture, we found a mixture of 30 to 40 different strains," says Prof. Dr. Schmidt. "That doesn't make it any easier to analyze and target the fermentation process."

Calcium does not affect gene activity ...

Nevertheless, the scientists have succeeded in identifying some of the genes that play an important role in the formation and degradation of bitter peptides. The focus of their interest is the gene responsible for the formation of the peptidase. It was suspected that the activity of this peptidase gene could be regulated by calcium.

New methods make it possible to record the activity of individual genes. "However, it turned out that calcium has no influence whatsoever on the activity of this gene," summarizes Prof. Dr. Schmidt. "However, we know that the pH value must drop below five within 24 hours during fermentation in order to curb gene activity."

"Of course, it would be easiest if we could grow strains that do not have this gene," he continues. "Unfortunately, however, strains of bacteria that don't have the peptidase gene can't survive on their own. They need the other strains to produce the vital peptides for them."

... but the regulation of the enzyme

Perhaps the activity of the enzyme formed could be influenced? The catch: "We have found a total of nine different regulatory points for enzyme activity," says Prof. Dr. Lutz Fischer from the Department of Biotechnology and Enzyme Science. "And depending on the bacterial strain, calcium can have a different effect. Sometimes it promotes enzyme activity, and in another strain it reduces it."

"In recent work, however, a clear trend is emerging," says Prof. Dr. Fischer. "The cow's own milk enzymes, such as cathepsin and plasmin, are probably not the cause." Rather, the added bacterial cultures, which are necessary for the fermentation of the milk or milk concentrates, seem to be solely responsible.

The challenge now is to put together the various bacterial cultures in such a way that, on the one hand, the bacteria can still perform their desired task, but, on the other hand, as few as possible or none at all of the bitter peptides are present in the finished product.

Therefore, the scientists recommend the manufacturers of starter cultures to use enzymatic tests in addition to classical culture and molecular biological techniques. This is because, according to current knowledge, the formation of bitter peptides is mainly decided at the enzyme level.

The aim of the project was to investigate the influence of lactic endogenous peptidases and that of exogenous peptidases of starter cultures on the formation of bitterness in fresh cheese. Particular attention was to be paid to the influence of calcium content, as there is an increased content of calcium ions in concentrated dairy products and such fermented products exhibit increased bitterness.

The project started on 1 October 2017 and ran for three years. The German Federal Ministry for Economic Affairs and Energy (BMWi) provided a total of 448,130 euros as part of the "IGF - Industrielle Gemeinschaftsforschung" funding programme, of which 153,070 euros went to the Biotechnology and Enzyme Science subject area, 152,090 euros to the Food Microbiology and Hygiene subject area and 142,970 euros to the Dairy Science and Technology subject area. The project sponsor is the German Federation of Industrial Research Associations (AiF).