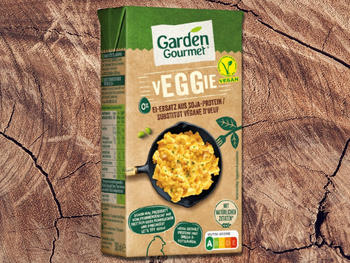 Nestlé is expanding its range of plant-based foods with two more innovations: vegan alternatives to egg and shrimp. Just before the start of Anuga in Cologne, the world's largest food and beverage trade fair, Nestlé has now presented the two innovations in London.

Vegan innovations are perfect for frying, baking and deep-frying

The plant-based egg alternative Garden Gourmet vEGGie is made with soy protein and contains omega-3 fatty acids. It carries a Nutri-Score A in Europe. The thick vegan egg substitute can be scrambled and fried like real eggs, such as for scrambled eggs or omelets. Garden Gourmet vEGGie is also suitable as an ingredient in baking. One pack contains 300 millilitres, which is equivalent to six eggs.

The vegan shrimp are introduced under Garden Gourmet Vrimp. They are based on a combination of seaweed, peas and konjac root and carry a Nutri-Score B in Europe. Garden Gourmet Vrimps have the distinctive texture and taste of succulent animal shrimp. They are perfect for salads and poke bowls, stir-fries, fried foods and more. One jar contains 95 grams of vegan shrimp.

Nestlé's aim is to offer consumers an even wider choice of plant-based foods that complement their diet in a healthy way and are good for the environment. For example, plant-based fish and seafood alternatives can help reduce overfishing and protect ocean biodiversity. This includes the successful launch of vegan tuna, which is now available in Germany, Switzerland, Italy and the Netherlands.

Stefan Palzer, Nestlé Chief Technology Officer, says: "Our new plant-based shrimp and egg alternatives have authentic texture and taste, as well as good nutritional profiles. This makes them an ideal alternative to animal originals for many dishes. Our years of expertise in plant, protein and nutritional science have enabled our teams to develop these great innovations in less than a year. Our research team is already preparing to launch the next vegan innovations."

Both Garden Gourmet Vrimp and vEGGie will be launched later this year as a test for a short period in selected supermarkets in various European countries - including Germany. Both products are manufactured at the Nestlé Product and Technology Centre (NPTC) in Singen, Germany. The NPTC Singen brings together a range of experts in a pilot plant that can test innovations quickly and produce them in large quantities.