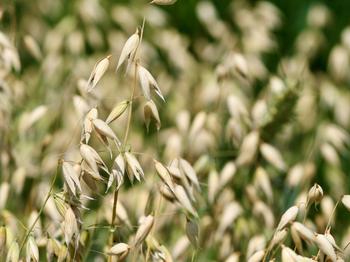 The oat genome, which has now been sequenced for the first time, is very complex and comprises more than 80,000 genes.

Oat is a global crop. Its production currently ranks seventh among the cereals. Compared with other cereals, cultivation requires fewer treatments with insecticides, fungicides or fertilisers. In recent years, oat has experienced a revival, especially through oat milk. "Oat milk is a very high-quality product that tastes good and serves as a vegan milk substitute," says Dr. Martin Mascher, head of the research group “Domestication Genomics” at IPK Leibniz Institute and among the autors of the study, which now has been published in the journal Nature. Unlike wheat and barley, oat is used directly as food. "Barley is used for brewing, wheat for baking bread, but oat, for example in the form of oatmeal, is still very close to the original grain.”

Oat is a member of the economically important grass family (Poaceae) that includes wheat, rice, barley, common millet, maize, sorghum and sugarcane. Wild Avena species are found in the Mediterranean, the Middle East, the Canary Islands, and Himalayan regions. Oat is a hexaploid meaning that its genome is composed three subgenomes that were donated by three wild Avena species in the past 10 million years.

The very long evolutionary history of oat has also seen the replacement of individual sub-genomes. Therefore, oats have a very complex genome, which differs considerably from wheat and barley.  “The oat genome exhibits overall structural similarity to the genomes of wheat and barley, but frequent genomic rearrangements in oat have resulted in a mosaic-like genome architecture”, explains Dr. Mascher, who is also member of the German Center for Integrative Biodiversity Research (iDiv).

“For the first time, it is now possible to link individual genes to agronomic traits in oat”, says Dr. Martin Mascher. The researchers showcase detailed analyses of gene families implicated in human health and nutrition, adding to the evidence supporting oat safety in gluten-free diets, and perform mapping-by-sequencing of an agronomic trait related to water-use efficiency. “In summary, this fully annotated hexaploid oat reference genome lays the foundation for advances in oat breeding and basic oat biology, and for the ongoing pan-genome project”, explains Dr. Mascher who is coordinator of the international PanOat consortium that aims at sequencing the genomes of 29 diverse oat varities.

With the chromosome rearrangements in a typical spring oat cultivar now delineated, breeders and researchers will have access to a resource of equal calibre to the genomes of wheat and barley, which may help them overcome breeding barriers associated with the dearth of genomic sequence information.

Using the reference genome to map genes associated with agronomic and human nutrition-related traits is a viable approach for precisely adapting oat varieties. “Modern breeding strategies such as genome editing and gene pyramiding can now more easily be applied in oat to develop varieties that meet the increasing global demand for oat-derived products”, explains Dr. Mascher.

“After barley, wheat and rye, the IPK Leibniz Institute has now once again demonstrated its leadership in the elucidation of genome sequences”, says Prof. Dr. Nils Stein, head of the research group “Genomic of Genetic Resopurces” at IPK and also a co-author of the study.