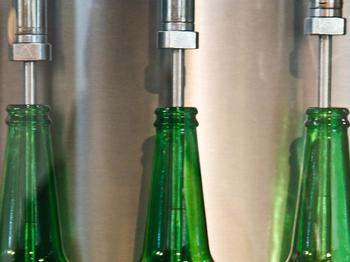 Strong demand from the beverage industry is keeping filling and packaging equipment manufacturer Krones <DE0006335003> on course for growth. Following a surprisingly strong performance in the first half of the year, management continues to see good opportunities to increase sales by eight percent this year.

This would be the upper end of the previous target range. With a view to operating profit, the Executive Board around Krones CEO Christoph Klenk is even becoming more optimistic, and the order book is getting thicker. The news was well received on the stock market.

Krones shares rose by more than four percent shortly after trading began, but were unable to maintain this level. At midday, it was still up around two and a half percent at 88.35 euros, making it the strongest stock in the SDax <DE0009653386> small-cap index, which fell sharply. Since the turn of the year, it has thus still lost around eight percent.

Following the quarterly figures, Bankhaus Metzler raised its recommendation for Krones shares from "hold" to "buy" and increased its target price to 105 euros. The Group's restructuring is paying off, wrote analyst Stephan Bauer. Other banks and analysts reaffirmed their buy recommendations, but are already forecasting prices of 120 euros and more for the stock.

In the second quarter, Krones performed consistently better than analysts had expected on average. Sales grew by 18 per cent year-on-year to just under 998 million euros, as the company announced this morning in Neutraubling near Regensburg. Operating earnings before interest, taxes, depreciation and amortization (Ebitda) rose 44 percent to just over 88 million euros. The bottom line was a profit of 43 million euros, an increase of around 79 percent.

Meanwhile, the company can hardly save itself from new orders. In the second quarter, Krones took in orders worth more than 1.55 billion euros, only just missing the record figure from the first quarter. By the end of June, the order backlog had swelled to a good 3 billion euros, almost twice as high as a year earlier.

The Executive Board was correspondingly more confident about the year as a whole. Not only sales growth but also the operating margin are expected to reach the upper end of the target ranges announced in the spring.

Meanwhile, the increased material and freight costs are also making themselves felt at Krones. Production capacities were stable, but not fully utilized, the company reported, referring to the global shortage of materials and strained supply chains. The fact that the operating result nevertheless rose was due to increased efficiency. In addition, the first price increases had a positive effect.

However, in view of rising purchase prices, the war in Ukraine, and high inflation rates in many countries, Krones' top management also sees dangers for further business development. The further development of the Corona pandemic is also still unclear. The forecasts are therefore subject to the proviso that the war in Ukraine does not escalate any further, that the Corona situation does not worsen, and that there are no significant energy bottlenecks./stw/mne/jha/ (dpa)