Fight against the grape moth 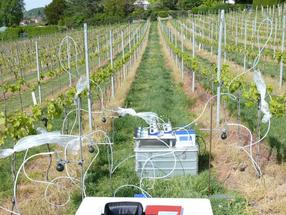 Fragrance collection on vines for behavioral experiments with grape moth

Vine protectors at the JKI want to develop an egg deposition card that can be read on a smartphone and can be used to better predict the occurrence of the wine pest. In this way, grape mothers could be combated even more specifically in the future and pesticides could be saved in viticulture.

Since mid-July they have been flying back into the vineyards, the harmful grape moth. The female butterflies look for the best places to lay their eggs on vines and grapes. In order to prevent damage caused by moulds, it is important to know when the pest occurs and what the females are literally flying at. This is because the larvae hatching from the eggs can only be controlled biologically or chemically within a very narrow time window. The young larvae must be caught before they enter the berries. Researchers at the Julius Kühn Institute (JKI) are working with a small company to develop an egg deposition card that will make the fight even more effective in the future. With their help, winegrowers will then be able to use a smartphone to determine the time of occurrence and the severity of the pest infestation more easily and accurately than before.

"To do this, we have to make the card for egg laying monitoring so attractive that female grape mothers prefer to lay their eggs there," reports Margit Rid from the JKI Dossenheim site. As part of her doctoral thesis, the scientist has investigated the olfactory stimuli that the female grape moth moth uses to orient itself and which surfaces they find attractive for laying eggs. "We have been able to show in behavioural experiments that the egg deposition rate of females is highest when the optics, surface and odour are correct," said Rid summarising the findings. However, the wax layer on the berry surface with its main substance oleanolic acid proved to be particularly decisive.

Fragrance bouquets emitted by the grapes play a subordinate role. The only important thing for the females seems to be that it smells like grapes. However, a preference for individual components or for the scent of a specific grape variety does not seem to exist, the JKI researchers write in the "Journal of Plant Diseases" https://doi.org/10.1007/s41348-019-00214-y. In order to achieve this, they presented the two types of grape vine moth with the scents of four different grape varieties. At the JKI site in Siebeldingen, doctoral student Anna Markheiser researched the shape and colour of the ideal egg deposition card and examined the attractiveness of other individual fragrance components.

Thus, the researchers are constantly exploring the prototype of an egg laying card, the egg set of which is to be read with an associated smartphone app. So far, winegrowers have had to examine about 100 grapes for the tiny egg clutches in order to determine the pest infestation, which is almost impossible with the naked eye. In many vineyards the mating of the moths is disturbed preventively by the pheromone confusing technique. Since the females that then remain unfertilized do not lay eggs, it is not yet possible to precisely determine the actual egg density in the vineyard. With the egg laying card and the app, however, the egg stock on the card could be correlated exactly with the actual egg density in the vineyard. This would make it possible to detect an exceedance of the damage threshold and then more accurately plan the use of the protective measures. This would save the winegrowers time, money and pesticides, regardless of whether they are using preparations approved for organic viticulture or other insecticides.