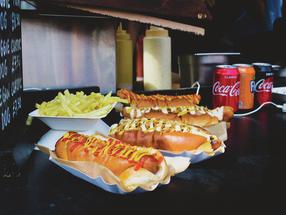 Photo by call me hangry

Overweight and metabolic problems such as diabetes are probably the most common consequences of unhealthy nutrition. But years of malnutrition can also lead to completely different problems - at least British experts believe.

According to his doctors, an unhealthy diet has almost blinded a young person in Great Britain. Rhys Harrison and his colleagues from the Bristol Eye Hospital report in the specialist magazine "Annals of Internal Medicine" that his hearing is also impaired. For years, the boy had only fed on a few junk food things like fries and chips. He probably suffers from a certain form of eating disorder. The nutrition researcher Stefan Kabisch from the German Institute for Nutrition Research (DIfE) in Potsdam does not consider the described connection between malnutrition and visual and hearing loss to be probable. Hans Konrad Biesalski of the German Society for Nutritional Medicine also believes that other health problems are probably responsible for the complaints.

The first problems, which were probably due to his diet, the boy already got as a teenager, as the British doctors explain. At the age of 14, he reported persistent fatigue to his family doctor. He was fussy with the food, but otherwise healthy. The doctor diagnosed a vitamin B12 deficiency, which he corrected with vitamin injections. The boy also received nutritional advice.

A year later he complained about hearing loss and a little later about problems with seeing, as it was called. The doctors found no causes. At the age of 17, his vision had deteriorated further and he was referred to a specialist who diagnosed damage to the optic nerve. At first, the doctors did not find the reason for this. The nerve was not inflamed or trapped, nor was a genetic cause found.

The only abnormal finding was a low vitamin B12 level. This prompted the doctors to take a closer look at the young person's diet. He told us that since his primary school days he had only eaten chips, certain crisps, white bread, ham and sausages. He would not eat other foods because of their texture. He wasn't overweight, he didn't smoke, he didn't drink, he didn't take drugs. The doctors found very low levels of copper and selenium, zinc levels were elevated, vitamin D levels were too low and bone mineral density was too low.

The values for vitamin A and E as well as folic acid and iron were also low, although still within the normal range.

The doctors corrected the deficits with the help of dietary supplements, and he was referred to special therapists for treatment of his eating disorder. The eyesight did not get worse, but it did not improve. Such damage to the optic nerve due to poor nutrition alone is rare in industrialized countries, the authors write.

He does not think that the patient's vision and hearing problems have anything to do with his diet alone, says Stefan Kabisch from DIfE. There was no question that the boy had not eaten a healthy diet. "But his vitamin levels are still relatively good, they are in the low normal range and in my opinion cannot explain the visual and hearing disorders.

People with a massive deficiency of vitamin B12, for example, experience tingling sensations in their feet and later gait disorders. It is possible that the patient has a metabolic disorder which leads to the fact that he cannot make sufficient use of the vitamin B12 absorbed. Despite the poor choice of food, the nutrition delivers enough vitamin B12, the body does not use it correctly. The other deficiency symptoms would have an independent potential for health disorders, but could not explain the loss of hearing and sight sensibly either.

Nutritional scientist Biesalski from the University of Hohenheim points out that foods such as those described only have a low nutrient density at high energy density. He suspects that the patient's poor diet is compounded by other problems, such as an unfavourable genetic predisposition. "The fact that a very bad long-term diet causes damage to the optic nerve is well known, although very rare. "This is usually associated with excessive alcohol consumption." Nevertheless, ophthalmologists should also consider nutrition in cases of unclear vision loss, even in patients of normal weight.

According to the authors of the case report, the adolescent probably suffers from a so-called "avoiding/restrictive eating disorder". Those affected eat very selectively - but not in order to influence their weight or figure, but because they find the texture of certain foods unattractive. In addition, eating can be associated with fears of suffocation or vomiting.(dpa)