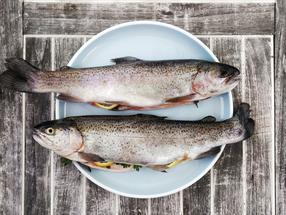 Photo by Gregor Moser on Unsplash

Children should be introduced to fish or cod liver oil early in life, from when they are about a year old. That's because children who consume fish early on show significantly reduced occurrences of eczema, wheezing and asthma at age six, as reported by their parents.

The reduction ranges from 28 to 40 per cent fewer occurrences for the various conditions.

"We compared children who ate fish at least once a week until they were two years old with children who consumed less fish than that," says associate professor and first author Torbjørn Øien, from the Norwegian University of Science and Technology's (NTNU) Department of Public Health and Nursing.

Researchers from St. Olavs Hospital and NTNU conducted the study, which has now been published in the journal Nutrients.

The baseline for the study was figures from the paediatric allergy survey Prevention of Allergy among Children in Trondheim, which was started in 2000. Data from more than 4 000 families contributed to these new analyses, which investigated the relationship between the mother's or child's fish intake and the child's development of eczema, asthma and hay fever.

All of these health conditions have increased sharply in Norway since the 1950s. They have been linked to various changes in our lifestyle, including that the population as a whole is eating less fish.

"It seems that eating all types of fish provides a health benefit, not just fatty fish," says Melanie Rae Simpson, the senior author and a postdoctoral fellow at the Department of Public Health and Nursing.

The authors have also taken into account other factors that may be involved, such as socio-economic status.

It could be that children from some social groups - such as having parents with higher education or high incomes - have health advantages regardless, due to multiple factors.

Perhaps these children simply have more fish in their diets, and the health benefits aren't due exclusively to their fish intake, but to several other influencing factors as well. The research team did what they could to account for these possible factors.

"In line with previous meta-analyses of several studies, we found that consuming fish at the age of one year seems to reduce the risk of eczema, asthma and wheezing at the age of six. This is more significant than the mother's intake of fish and cod liver oil during pregnancy and breastfeeding or the child's intake at two years, which do not appear to have the same protective effect," says Øien.

One conclusion from the study is that we should increase children's fish intake in the first year of life to have a preventive effect against eczema and asthma.