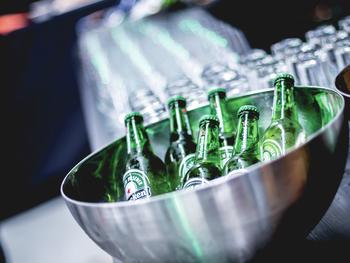 The Dutch beer brewer Heineken increased its profits last year by about 13 percent to almost 2.2 billion euros. More beer was sold at higher prices, according to the annual figures presented by the company in Amsterdam on Wednesday. This year, the world's second largest beer brewer is again banking on growth.

Heineken closed the past year with a turnover of around 28.5 billion euros, which was around 6.4 per cent more than in the previous year. The Heineken brand alone saw growth of 8.3 percent. According to the company, the advance of non-alcoholic beer continued. Of the approximately 241 million hectolitres of beer, about 14 million were non-alcoholic or low in alcohol.

Company boss Jean-François van Boxmeer expects revenues to rise again in 2020. However, he pointed out that the effects of coronavirus in Asia, for example, could not yet be assessed.

Heineken sold 12 percent more beer in Asia last year in particular. Sales also increased on other continents with the exception of Europe. The Belgian van Boxmeer had announced his resignation for this summer the day before./ab/DP/jha (dpa)