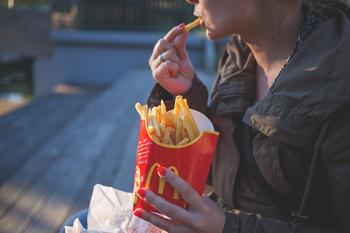 The Robert Koch Institute (RKI) has published new data on dietary behaviour in the Journal of Health Monitoring, with a focus on children and adolescents.

The data source is the second ‘Eating study as a KiGGS Module’ (EsKiMo II). As an important compo-nent of health monitoring at the RKI, KiGGS is the regularly conducted comprehensive study on the health of children and adolescents in Germany. As emphasised by Professor Lothar H. Wieler, President of the RKI: ‘The health of children and adolescents is vitally important because the foundations of adult health are laid in childhood and adolescence. The data are the basis for recommendations for preventive measures’.

Fast food is usually rich in fat, contains high amounts of highly processed carbohy-drates, and is rich in salt and hidden sugars. As a consequence, it is regarded as un-healthy. 23% of 12- to 17-year-olds reported a high consumption of fast food. These ‘high consumers’ show differences according to sex, age, socioeconomic status, type of school, community size and media consumption. For example, the proportion of energy from fast food increases with age while it decreases with a higher socioeconomic status of the family. The energy that girls get from fast food has hardly changed over the last decade (125 and 126 kilocalories per day, respectively), while the corresponding figure for boys has decreased markedly (from 252 to 188 kilocalories per day). Professor Wieler emphasises: ‘One thing is clear: That is not enough. In view of public health, fast food consumption should be further reduced’.

The data on caffeine intake from energy drinks is also interesting, as these contain more than twice as much caffeine as standard cola beverages. Excessive caffeine intake can lead to side effects such as nausea and anxiety. EsKiMo II shows that almost 25% of 12- to 17-year-olds who consume energy drinks exceed the caffeine limit recommended by the European Food Safety Authority with energy drinks alone.

In addition to the EsKiMo II data, the Journal of Health Monitoring 1/2020 includes an article on adults and their use of canteens offering healthy food choices. GEDA 2014/2015-EHIS is the first study to present data on this issue from a public health per-spective.