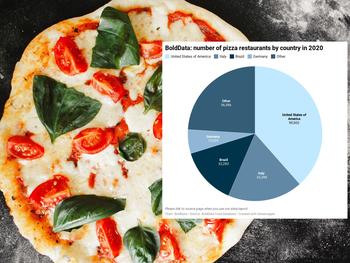 Next week is National Pizza Week. An entire week in honor of one of America’s all-time favorite foods. Time to crunch the numbers! The latest statistics from data specialist BoldData show that the amount of pizza restaurants in America has increased with a whopping 39.2% over the last five years. However, the growth abruptly stopped in 2020.

California is the pizza place to be

When it comes to pizza, California is the place to be. The state has 8.271 pizza places, of which 2.044 are based in the Los Angeles area. New York comes in second with 7.190 restaurants, a growth of 48% compared to 2016. The biggest growth took place in Hawaii: a whopping 69%. Pizza lovers best stay away from Wyoming, the state has the lowest number of pizza joints (133).

USA takes biggest slice worldwide Americans love their pizza. It’s even considered America’s favorite food. Therefore it’s no surprise that the USA is home to the largest number of pizza restaurants worldwide. Italy - where the modern pizza was originally invented - comes in second with 42.288 pizzeria’s. Brazil completes the top 3 with 32.283 pizza joints. But the USA has nothing to fear from the rest of the world. With 90.817 pizza restaurant the USA still has more pizzeria’s then the top 4 combined (88.100). Australia is number 8 on the list: with 5.598 pizza restaurants they have one of the highest number of pizza places per capita.