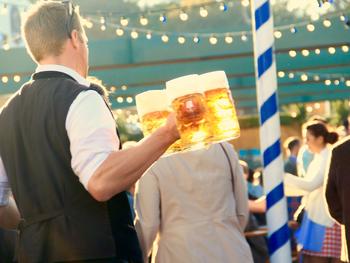 After five years of examination by the EU Intellectual Property Office (EUIPO), the Munich Oktoberfest is now a protected trademark. The office, based in Alicante, Spain, has approved the Munich city council's application for trademark protection for Germany's best-known folk festival. The trademark protection is initially valid until 2026. This year's Oktoberfest was supposed to have started on Saturday, but was cancelled for the second time in a row due to corona.

The Munich city council wants to prevent Oktoberfest profiteers with the registered trademark. The term is protected for 22 product categories including tourism advertising, but also for products and services - from soap to credit cards to uniform rental. Trouble in Munich's city hall had recently been caused by the plan of some businessmen to raise a replacement Oktoberfest in Dubai on a large scale.

"For me, it's about the question: do people want to cash in on Munich, and does that harm Munich?" said Munich's economic affairs officer Clemens Baumgärtner (CSU). "For me, the big line is important. If it is said that the Oktoberfest is now moving to Dubai, then that is encroaching. That's not on, we'll take action against that."

For the CSU politician, the many small "Oktoberfests" around the globe, from which Munich even benefits according to Baumgärtner's assessment, are a different matter. As an example, he cited the U.S.: "The Oktoberfest in Cincinnati never tried to copy Munich, that's more under the category of advertising."

The Bavarian original is now almost comprehensively protected under trademark law, as the city administration has had the term combinations "Münchner Oktoberfest" and "Oktoberfest München" protected, as well as "Wiesn", "Oide Wiesn", or even "Oktoberfest Oide Wiesn München". These applications went through in Alicante even earlier than the pure "Oktoberfest".

However, almost comprehensive does not mean complete: there has been a separate trademark registration for "Oktoberfest Dublin" for years, and the rights holder to the term "Wiesn" has been Segmüller Polstermöbelfabrik for three product classes in terms of furniture since 2012.

Likewise protected are "Wiesnkönig", "Wiesnschönheit" and "Wiesn-Vegetarier", to name just a few examples. Behind these brands, too, stand businessmen and not the state capital.

Munich's Theresienwiese is currently home to Corona test tents instead of beer tents, but for the uninspired, there are at least the usual devotional items like the official Wiesnkrug to buy.

Oktoberfest beer is also available - the latter a protected trademark of the Munich breweries./cho/DP/nas (dpa)