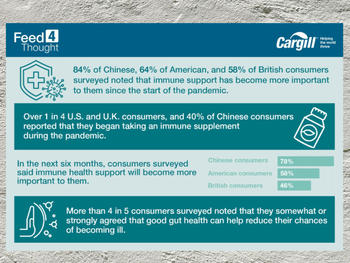 A recent survey of 3,008 consumers across three continents uncovered that interest in immune health support increased since the pandemic began and is predicted to continue longer-term. Among participants in Cargill’s recent global Feed4Thought survey, 84% of Chinese, 64% of American and 58% of British consumers noted that immune support has become more important to them since the start of the pandemic.

Other key findings from consumers surveyed include:

“Consumers are recognizing the benefits of taking action for their immune and gut health to support overall health and well-being,” said Chuck Warta, president of Cargill Health Technologies. “Our Feed4Thought survey is invaluable for understanding how consumer attitudes about immune and gut health have evolved and how we can better meet their growing demand for immune support supplements.”

Cargill sees health ingredients as one of the fastest-growing segments in nutrition and is focused on further growth to help its customers meet the needs of consumers. It is making significant investments in digestive and immune health for human health like its acquisition of EpiCor, the leading postbiotic brand, and Diamond V for animal health.