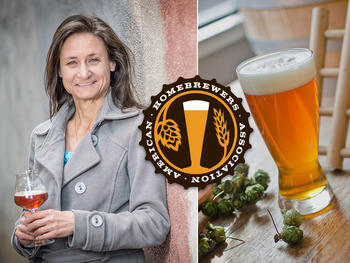 Herz (pronounced “hers”) has more than two decades of experience in the brewing industry, including two prior roles at the Brewers Association. She is a cause marketer, an award-winning homebrewer, a BJCP certified beer judgeOpens in new window, an Advanced Cicerone®, a beer educator, and co-author of Beer Pairing: The Essential Guide from the Pairing Pros and CraftBeer.com’s Beer & Food CourseOpens in new window. Herz’s accomplishments include creating and publishing Craftbeer.comOpens in new window, the website for craft beer lovers, and passionately leading the promotion of small and independent craft brewers via national beer holidays, the independent craft brewer seal, and promoting responsible beer appreciation to mainstream media and beer lovers.

“My brewing journey began in 1991 with my first batch of homebrew. I’ve spent many years since as a fierce advocate for the craft brewing community and now, many batches of homebrew later, I can’t wait to walk in the footsteps of so many amazing people as leader of the AHA,” said Herz. “I will always consider myself a beer beginner on an endless journey to learn more about the art of craft beer and the AHA is the perfect place to do that. I genuinely believe in the reward and value of the hobby and am eager to showcase homebrewing to new audiences.”

Herz’s first day with the American Homebrewers Association will be December 1.