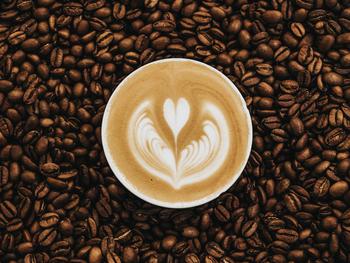 Photo by Nathan Dumlao on Unsplash

The favorite drink in this country is coffee. Consumption is rising, also thanks to ever new creations. The global market is ensuring that the hot passion could become more expensive.

Amid record high inflation, consumers in Germany will probably have to dig deeper into their pockets once again for their favorite beverage. The main reason for this is the persistently unfavorable harvest situation in Brazil, by far the world's largest coffee producer. This has already driven up the purchase prices for green coffee throughout 2021. Beans of the Arabica variety, which account for around 60 percent of global coffee production, are trading at a price level that the coffee market has not known for a decade.

Germany's leading coffee roaster, Tchibo, is responding to the incessant rise in purchase prices and on Monday put its customers in the mood for price increases for the second time in nine months: As of February 21, retail prices are to rise between 50 and 130 cents per pound, depending on the variety and country of origin. As the market leader, Tchibo is considered to be one of the most important signal generators for coffee sales prices. The coffee roaster had already increased prices by 50 to 100 cents per pound in June of last year, after several price reductions in previous years.

Even then, this was due to higher purchase prices on the world markets. They have continued to rise sharply since then. "We hesitated for a long time, but since last summer green coffee prices have risen by 50 percent. We are taking this development into account and are now adjusting our sales prices," said Tchibo spokesman Arnd Liedtke. Tchibo assured that sales prices would fall again "as soon as green coffee prices allow."

Tchibo is generally the only supplier to communicate its pricing. This is because the retail group sells its products directly to end consumers via its own stores and depots as well as online, and can therefore also set the final prices. Other coffee roasters supply their products to food retailers, who in turn set the final prices. Aldi is considered an important pacesetter here. The discounter operates its own roasting plants. Aldi did not respond to a question about coffee prices on Monday. The competition of Tchibo expressed itself as usual narrow-lipped: "To the topic coffee prices we do not give a statement", it was said for example with Darboven in Hamburg.

Behind the price increases on the purchasing side is a cocktail of reasons. "Coffee prices continue to reflect the tight supply, especially from Brazil," said commodity expert Claudia Wellenreuther of Hamburg-based research institute HWWI, summarizing the situation. "The impact of the extreme drought at the beginning of the season and the subsequent frost on the Brazilian coffee crop continues to be reflected in high coffee prices."

In addition to rising quotations on green coffee exchanges, the trend toward a stronger dollar is also getting in the way of buyers, as both Arabica coffees traded in New York and the Robusta variety traded in London are priced in U.S. dollars. In addition, the ongoing tensions in global supply chains, with delays and drastically higher freight rates in container shipping, are also being felt in the coffee business.

According to Commerzbank commodity analyst Carsten Fritsch, global demand has also made up for last year's corona-related dip. "The global coffee market is thus facing a supply deficit." While coffee prices are likely to fall over the course of the year, they should remain at elevated levels. That's because Brazil's 2022 coffee crop could also disappoint as an aftermath of severe storms and drought and frost last year.

The International Coffee Organization (ICO) most recently reported a continued price rally in its December market report amid a slump in exports, particularly from South America, where Colombia is one of the top producers along with Brazil. In its price index, which is made up of several types of coffee and stood at just under 116 U.S. cents per U.S. pound (454 grams) at the beginning of 2021, the ICO recorded a 75 percent increase to about 203 cents by the end of the year - a high since September 2011, when it stood at 213 cents.

The price even more than doubled for the Arabica variety, which is very popular in this country. "While Arabica still cost around 120 U.S. cents per pound at the beginning of 2021, the price reached a good 250 U.S. cents at the beginning of December, the highest level in more than ten years," reports Fritsch. According to the German Federal Statistical Office, import prices for green coffee in Germany were most recently a good 70 percent above the previous year's level in December. At the consumer level, prices at the end of the year were 8 percent higher on average in a year-on-year comparison, according to data from the statisticians.

With a per capita consumption of 168 liters per year (as of 2020), coffee is the most popular beverage in Germany, ahead of mineral water and beer - and the trend is rising. It is true that during the corona pandemic, consumers did not drink as much coffee away from home in coffee shops, cafés or bakeries for long periods. However, consumers more than made up for this effect at home.